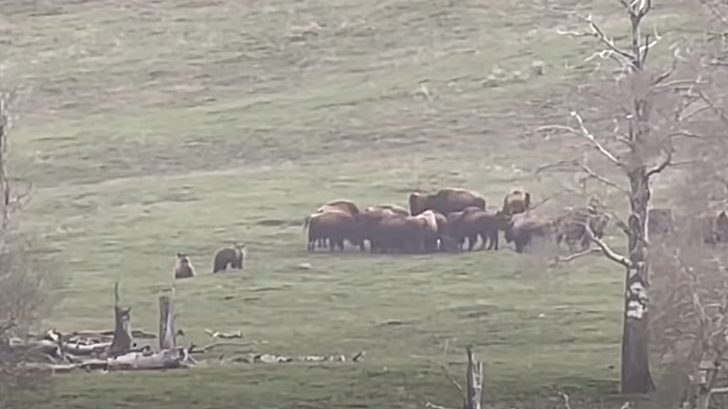 Professional wildlife photographer, Julie Argyle, was doing what she does best when she captured a video showing the beautiful moment a herd of bison had a funeral for one of their own while fighting off bears and wolves trying to get the carcass.

Julie shared the video to Facebook saying, “When a bison dies in Yellowstone, most of the time the herd that’s in the area will come to pay their respects and surround the dead bison and protect it for hours. This was definitely the case the other day.”

It wasn’t long after the bison died that the wolves and grizzly bears began to come out of the woodwork to try and sneak in as close as they can to get a bite of the dead.

The other mourning bison vigilantly stood around the dead and chased off the many attempts by the preditors trying to get close.

Julie wrote on Facebook, “As you can see in the video, wolves tried to come in and were chased away several times and two grizzly bears also tried to come in. None of them were allowed to get close to the dead bison until hours after it happened. Nature has an incredible way in life and death.”

The video showed bison standing guard as others nudged the carcass trying to see if the dead would come back to life.

Wildlife experts say that this type of behavior is not rare, however, it is rarely seen due to the fact that most situations like this occur far from roads or trails.

Julie happened to get the footage because she was shooting through a spotting scope at a distance of 1,000 yards in the Lamar Valle.

She said she stayed there filming the bison funeral until a storm swept through the area and forced her to leave.