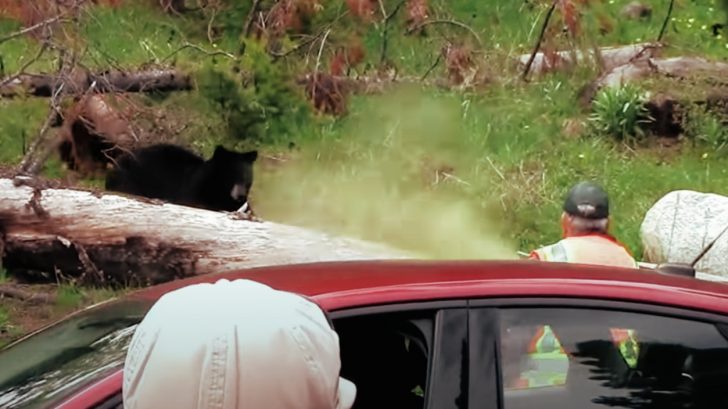 Park rangers at Yellowstone National Park got the opportunity to show the public how to safely scare a bear away that was getting too close, and it was all captured on video.

A mother bear and her two cubs were spotted near the side of the road as tourists gathered around to watch them. The bears played on a fallen log and slowly inched their way closer to the spectators.

A park ranger in the area noticed the bears were beginning to move in too close so he showed everyone the correct way to shoo away a bear. The ranger makes a warning noise and steps towards the bears and the babies run away, however, the mother reacts with a short charge towards the ranger.

To protect himself and the people, he pulls out his bear spray and yells at the bear again. The bear charges at him for a second time and too defend himself he shoots a fat cloud of spray into the air and scares her into retreating. The baby cubs do the same and follow her lead.

“The rangers did exactly what they were supposed to; they did not hurt the bears, just scared them away from the road. It’s extremely important to make sure bears do not feel safe around humans,” a viewer commented on the YouTube video.

Watch Park Ranger Use Bear Spray On Bear Below