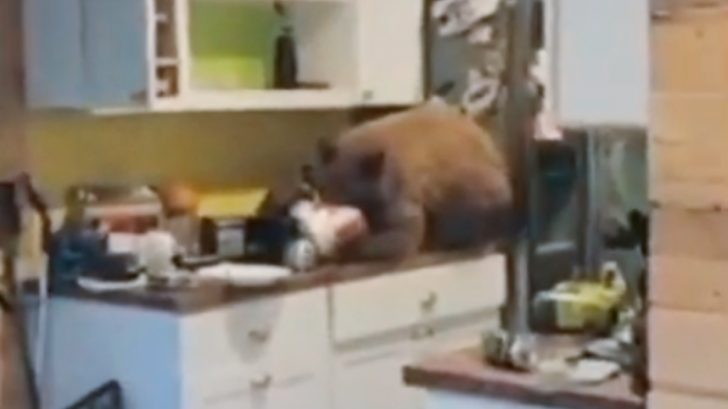 John Holden, from Sierra Madre, California was in for quite the scare this Halloween after returning home to find that a brown bear was in his kitchen devouring a bucket of Kentucky Fried Chicken (KFC).

John filmed the wild animal from a safe distance while it laid on top of his kitchen counter with both paws holding a big bucket of leftover KFC in which it had its entire face buried deep into.

He said when he first got home, he spotted another bear in his yard that he scared off by yelling at it. After that, he walked around to the entrance of the home and noticed the door to his house was wide open. As he peered in, that’s when he saw the bear on the counter.

Encounters with wild bears are fairly normal to him but he says this is the first time that a bear has ever broken into his home to steal his food.

“I’ve had a lot of other encounters with them,” Holden told ABC7. “I’ve actually had them bump into me a couple times in the backyard, but definitely never in the house like that. That was something else and they sure made a mess of the place.”

Fortunately, after making a lot of noise, the bear got scared and exited the home. However, the bear and its sibling didn’t run off too far…they were later spotted lounging around in the yard apparently feeling a little lethargic after feasting on the meal.

Watch Footage Of The Bear Below