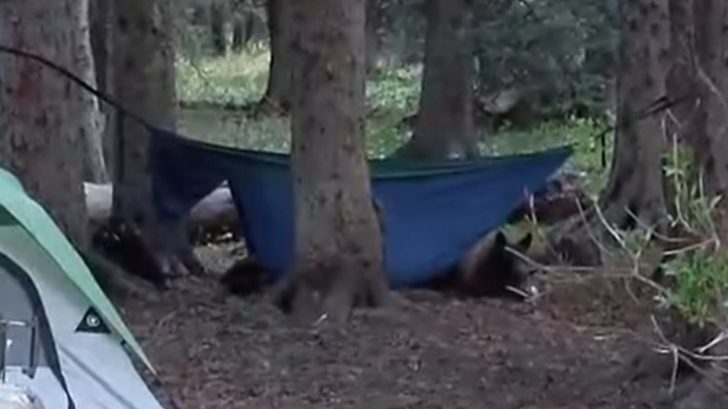 A camper visiting the Caribou-Targhee National Forest on Friday, June 10, captured video footage of a bear aggressively ripping up his hammock and tearing up his campsite.

The man said he was relaxing, laying in his hammock in Teton Canyon in the good weather when the bear appeared out of nowhere next to him and pushed him out of his hammock.

Startled, the man jumped to his feet and was able to make it a safe distance away from the bear while it destroyed his sleeping bag and the hammock.

Video footage shared on YouTube showed the bear repeatedly hitting the hammock with his claws and running through the campsite with the sleeping bag in its mouth.

“The bear then tried to enter an occupied tent before it was finally scared away,” officials said, according to SacBee said. “Fortunately, no one was injured during this interaction.”

However, when the man notified authorities of the situation, officials quickly shut down camping in the area except in “hard-sided vehicles.”

Wyoming Game and Fish were called to the area and set up bear traps in an attempt to catch the predator. Though, the bear was very clever and didn’t show back up to the location for three days in a row.

“Even though the bear still shows some healthy fear towards humans, its aggressiveness towards camps, tents, stationary items and food rewards is increasing, which is why we no longer feel it’s safe to camp in anything other than a hard-sided vehicle” Recreation Manager Joe McFarlane said on June 14, according to SacBee.

Recreation Manager McFarlane said that since the incident Teton Canyon is still open for recreational use, however, he strongly urges visitors to take “extreme precautions” while they’re in the area.

Watch The Video Footage Of The Bear Below