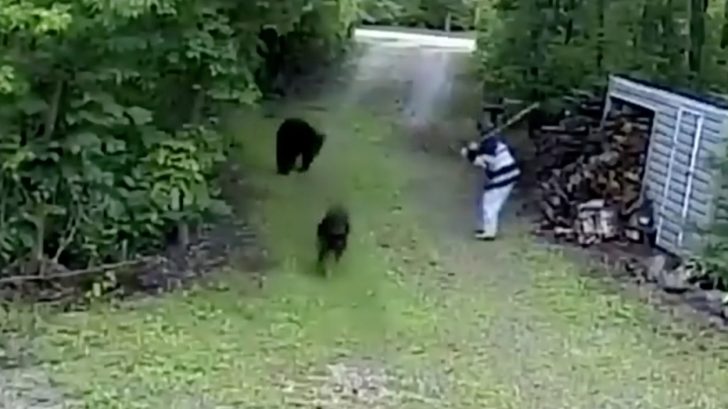 Diane Fillion from Winnipeg, Manitoba was captured on her home security camera getting tackled by a bear in her front yard.

Her home is located in Lac du Bonnet which has a population of about a thousand people so Diane is familiar with seeing wildlife. However, what happened on Saturday afternoon was the closest she had ever gotten to a wild mother bear on her own property.

She said that it all happened within the blink of an eye while she was playing with her dog. The mother bear and three cubs appeared out of nowhere and her dog scared one of the cubs up a tree.

“We have myself and my dog ​​and three bears all looking at each other,” she told CTV News. “The dog put one of the cubs in the tree, and then the mother came after my dog, and the fight started.”

Diane said she tried to make herself look big, make loud noises, and bang her stick on the ground to scare it off, but when her dog turned around and started running back towards her, the mother bear followed.

The bear had so much momentum running towards the dog, when it turned its direction to Diane, it slammed right into her and knocked her to the ground.

“I thought I had tripped, and then we pulled our security cameras and then we realized no, the bear really hit me.”

The mother bear turned around almost immediately and ran back into the trees to protect her cubs. Diane said the bear climbed into the trees with her cubs and she called the Manitoba Conservation, who came to assess the situation.

Wildlife officials said that the best thing to do was to let the bears climb down on their own and they’ll run back off into the wilderness – which they eventually did.

Wildlife biologist for the province Pauline Bloom added that there have been increased reports of bear sightings in the area due to the lack of rain, which she believes is part of the problem.

“There’s a lot less water in the landscape for bears to access,” Pauline said. “So they’re on land looking for permanent sources of water, and they’re also looking for food.”

Watch Footage Of Bear Encounter Below