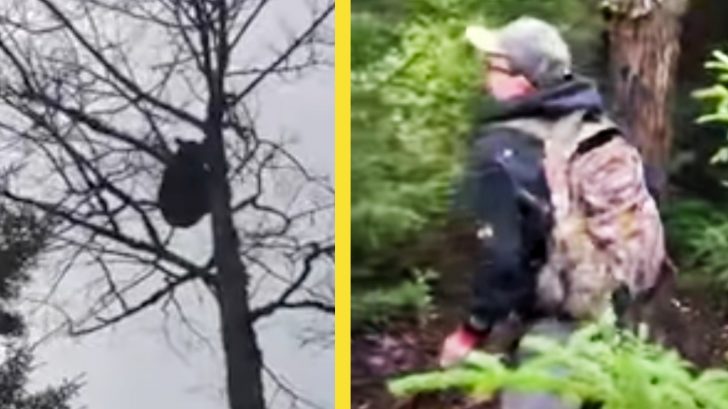 In a 2017 video of a group hunting trip in Maine, one unsuspecting hunter got a whole load more than he bargained for after treeing a black bear.

On what was the final day of the bear hunting season in Maine during 2017, a group of about five hunters and their dogs went off into the woods looking to fill their tags before they couldn’t anymore.

Clearly, the group got lucky and their dogs ended up treeing a bear – which they probably would have taken had the next series of events not happened.

As one of the hunters was approaching the tree, and another was holding his phone steady to record the hunt, they saw the bear scampering toward the top – and settle itself in the crook of a branch before getting into a squat like position.

Without any warning, a rainstorm of feces came flying down the branches of the tree straight at this unsuspecting hunter and the quick plopping sounds let everyone know that the bear had started an assault they could not compete with!

As the bear scat rained down on this poor hunter, his friends started howling with laughter and broke into strings of jabs at him reveling in his total misery.

For one of the most unique hunting stories you will ever see or hear of – check out the video below!