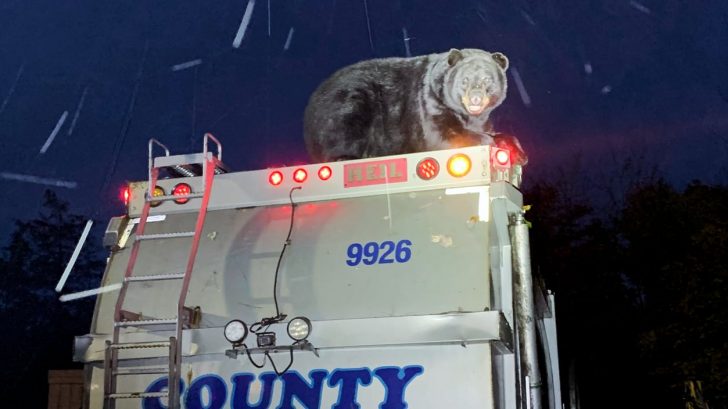 Vincent Murrow of the Kidder Township Police in Carbon County, Pennsylvania told WNEP they are receiving “almost daily” reports of bear sightings this year. As living proof that more bears are out and about in the area, one black bear turned up at the police department on Wednesday morning (September 30)…but it wasn’t on foot.

The bear was actually found perched on top of a garbage truck that came to the police department.

“We can only assume it was sick of going for the small, small amount of trash in the garbage pails and went for the big prize,” Officer Murrow told WNEP.

The Kidder Township Police shared three photos of the bear on its official Facebook page. “Bear Complaint this morning. He managed to come right to the police station on the garbage truck…” the department captioned the images.

People in the comments were pointing out how pleased the bear seemed to be with itself for climbing on top of the garbage truck. Look at the pictures below and see for yourself!

Bear Complaint this morning. He managed to come right to the police station on the garbage truck…

Katherine Uhler of the Pocono Wildlife Rehabilitation and Education Center offered some insight as to the bear’s possible motivation for climbing on top of the garbage truck. As Officer Murrow guessed, it all has to do with food.

Uhler told WNEP that bears are currently preparing to hibernate, so they’re trying to eat as much as possible. “Each bear is eating about 20,000 calories a day, which is about ten times more than you or I eat. So they are moving around a lot, and they are very hungry,” she said.

The garbage truck bear was likely looking for a bunch of tasty snacks to eat so it can bulk up in preparation for its long sleep ahead! Watch WNEP‘s report about the bear by tuning in to the clip below.