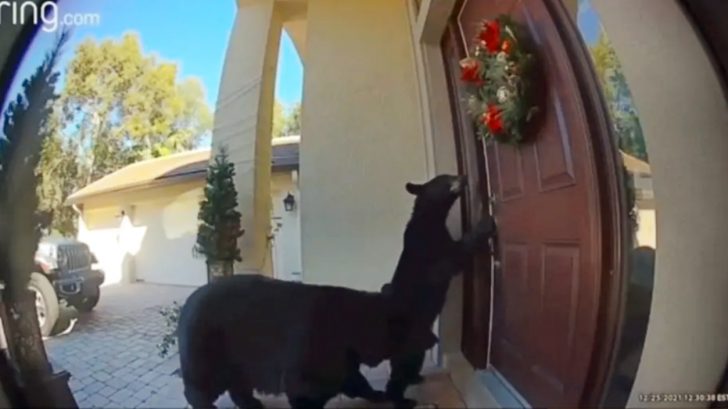 A family living in Sanford, Florida got the biggest surprise on the morning of Christmas after finding a family of bears visiting their front porch.

Marlene Stark said that she and her husband have been living in Sanford’s Lake Forest community for more than ten years and have seen bears, bobcats, deer, and bald eagles around the area.

However, this is the first time wildlife has come right up to the door and tried to break into the home.

The family’s Ring security camera system captured a mother bear and younger bear walking up to the front door in the broad daylight on Christmas and trying to open the front door but accidentally hitting the doorbell.

“We didn’t know it was bears initially. So, we ran to the front door and said ‘oh my goodness,’ and then we immediately threw the bolt lock,” Marlene said.

She provided the video to FOX 35 and it showed the small bear trying to push the door open but it didn’t work, so they both kind of started to back off and walk away from the home.

“I had no idea that they had that capability to open the front door. So, I’m glad it was locked,” Marlene said.

When asked by news reporters why she thinks the bears were attracted to their home, she said she had a hunch of what it possibly could have been.

“I’ve seen all kinds of things to where ‘you must’ve been cooking something, to they’re hungry.’ I was like, ‘I was just making a roast, the pan was covered.’ It wasn’t outside, so I don’t know,” she explained.