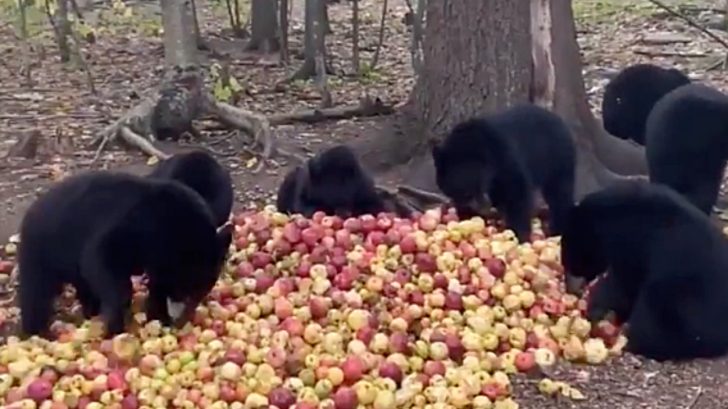 Writer, producer, and animal lover, John Fusco shared a heartwarming video on Twitter of a group of baby bear cubs chewing away at truckloads of apples dumped in the forest for them.

The organization has been rehabilitating and releasing injured, orphaned, and abandoned black bear cubs brought to the them by the New Hampshire Fish and Game Department since 1993.

In the video, you can hear the adorable cubs almost making a purring sound as they delight over all the sweet and crunchy apples brought to them by local farmers.

“Have you ever heard bear cubs make their ‘sound of contentment’?” John later wrote on Twitter.

The video was posted back in September 2020 but since then has gone viral with over 600 thousand views and still to this day, continues to pop up in social media and news outlets all over the world.

Why is that? — What most likely makes it such a viral video is that it’s very rare to see this many bear cubs this close up together in their natural habitat, so happy while they eat away.

The bear cubs were orphaned and will receive rehabilitation and care at the Kilham Bear Center until they are ready to be released back into the wild.

“They’re obviously in a healthy sanctuary,” Rae Wynn-Grant, a conservation scientist and large carnivore ecologist told LA Times. “It kind of makes sense that they would be cooing and telling us how great they feel.”

Watch Footage Of The Bear Cubs Below

Have you ever heard bear cubs make their ‘sound of contentment’? @RaeWynnGrant pic.twitter.com/CpuuM86imw