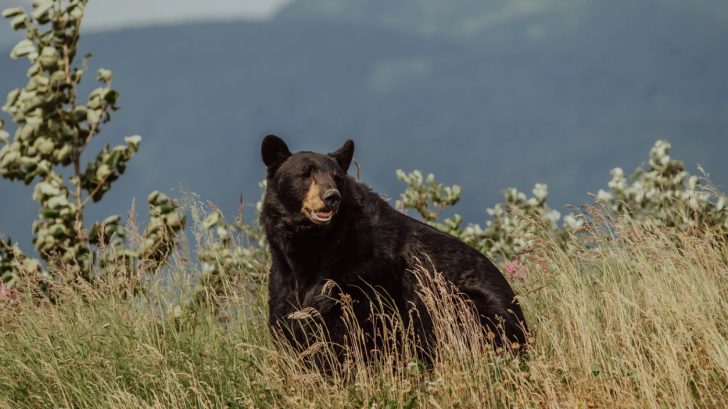 Shannon Stevens was bitten on the butt by a bear while she was using an outhouse on Saturday camping near Haines, Alaska with her brother and his girlfriend. Here’s the full story…

The group traveled by snowmobile 17 miles from Haines to a remote yurt near Chilkat Lake and set up camp. They enjoyed each other’s company by the outdoor fire cooking sausages, laughing, and having a good time until the sun went down.

Later that evening, while everyone was inside the yurt feeling toasty and about to lay down for the night, Shannon stepped outside of the yurt to walk down to the outhouse to use the restroom before going to bed.

“Normally, when we are out there in the summer or the fall I’m used to shouting ‘Hey, bear!’ the whole way. It was the dead of winter, so I didn’t think to do that this time,” Shannon told KHNS. “I got in there and sat down on the toilet seat, and something just immediately bit me in the butt. I jumped up and screamed.”

#alaskaproblems
Go to the bathroom, get bit on the butt by a bear. https://t.co/605nZY9r5c

Shannon screamed for her brother Erik Stevens who immediately came running to see what was the matter. Erik said that he took his headlamp and shined it at the lid as he lifted it up and right as he did, looking him dead in the face was a gigantic bear face.

How Did The Bear Get Into The Outhouse?

Erik explained that, “There’s a way out in the back of the outhouse, there’s a rock wall and there’s a way for a creature to get in through that rock wall. He probably just pushed the rocks over and got down into the hole.”

They both ran back to the house as fast as they could and hunkered down in the yurt for the rest of the night. In the morning, they all cautiously walked back to the outhouse to see if the bear was inside it but it was nowhere to be found. All that was left was a knocked-over fireplace where the sausages were cooked and a few footprints in the snow.

Here’s a story for you!

Carl Koch, a biologist for the Alaska Department of Fish and Game took a look at a photo taken of the bear’s footprints in the snow and he believes it could have been possibly been a black bear but it’s not certain.

Carl also added that a snowboarder was mauled by a brown bear in the area not too long ago and she was lucky to have made it out with minimal injuries. Shannon jokingly said that she’s definitely going to be looking down in the hole next time she uses the outhouse.

Bear Safety Tips In The Video Below