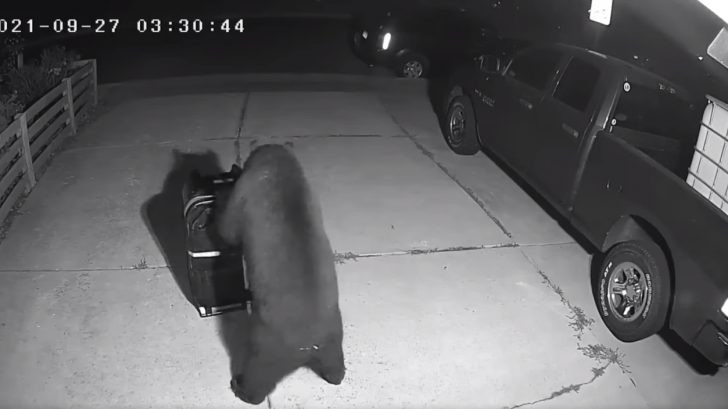 Isaac Brisk from Colorado, Springs shared footage of a bear stealing his trash can after trying to get into it and eat some food it smelled.

Home security footage shows the bear, who Isaac calls his “nightly visitor,” walk up his driveway and sniff out food in a trash bin that was sitting beside his vehicle.

The bear walked around the bin lifting up its nose to smell the contents before standing up on its hind legs to see if it could get in from the top. The bin was securely strapped down with straps fashioned in the way of a wrapped Christmas present and the bear wasn’t having any luck.

The straps proved too secure for the bear, so it tried to push the bin out of the driveway and across the street to open it. However, that didn’t work. Issac said he found the trash bin in the morning still strapped and not broken into.

According to a new ordinance that took effect in 2020 in Colorado Springs, residents living west of I-25 must secure their trash cans to avoid bear encounters.

New trash cans can be purchased that are bear-proof but people can also use their old cans, as long as they secure them in a garage or shed.

Those who violate the ordinance will be subject to a $100 fine on the first offense. Three or more offenses can cost up to $500. Colorado Parks and Wildlife said that last year a third of the calls made about bear encounters had to do with trash bins, with over 4,900 reports made and 1,600 plus trash bin-related.

Here is a progression map of when and where the bear reports come in across #Colorado. pic.twitter.com/qnYtVhCDXX

Wildlife officials say that because bears are getting ready to go into hibernation and trying to fatten up for the winter, they have an increased appetite.