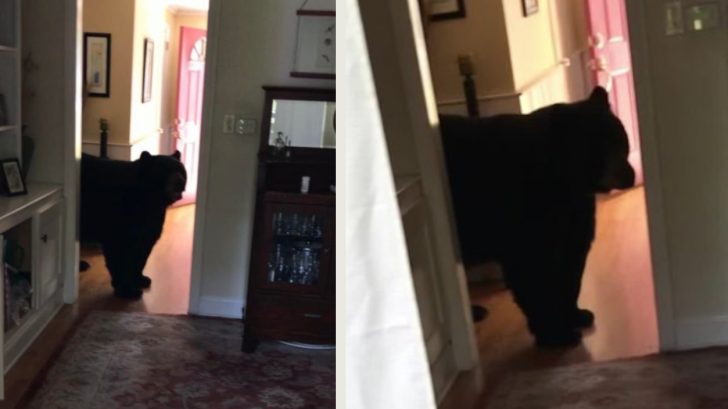 A family living in West Hartford, Connecticut told CBS News that they found a hungry black bear in their kitchen eating food one day and when they got it to leave, it came back again the next day.

Bill Priest said he walked into the kitchen on Sunday and found the black bear eating all kinds of food that the animal found in the home.

“He did startle me. That was probably the one time I was scared,” Bill told WFSB. “He had everything on the floor in there eating.”

The homeowner grabbed a chair to put between him and the animal and was somehow able to convince the bear to leave through the front door. However, the animal didn’t leave immediately, it first ate an entire bag of marshmallows and a bunch of other snacks.

Bill’s wife Christine Vannie said she and her husband were hanging out in the backyard with the music playing when Bill went inside to grab a drink. They didn’t hear the bear sneak into their home so Bill said he wasn’t expecting to walk right up on an apex predator.

“It took some convincing to get him to leave,” Christine wrote on social media, according to CBS News. “I share this because most bears are shy and this one was not.”

The original post was removed from Christine’s Facebook but there’s a screenshot of the bear in her home below.

The bear came back the very next day and ripped the screen door trying to get inside the couple said. The prior week Bill saw a bear get into his fridge in his garage.

Connecticut Department of Energy and Environmental Protection said they dropped off a trap and the department is going to try to catch the bear by sedating, tagging it, and relocating the animal.