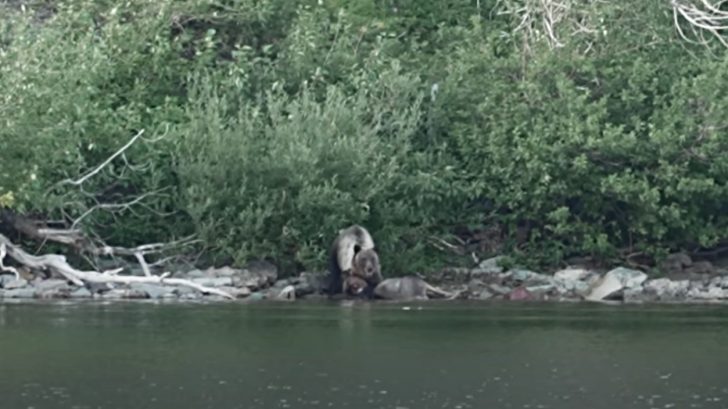 A couple going through the process of their wedding ceremony in the Glacier National Park had about 20 seconds left of their vows when they were interrupted by a grizzly bear killing a moose calf.

A video of the killing was posted to YouTube with the caption, “A wedding ceremony was taking place on the shore of Two Medicine Lake in Glacier National Park, when most of the way through the groom’s vows, a grizzly charged out of the brush onto the north shore and attacked a moose calf as the mother looked on.”

The description went on to explain that they had spotted the moose about 10 minutes before the attack moving briskly through the forest further up the mountain.

“The bear must have been chasing them for at least a little bit,” the description read.

The video showed the groom trying to finish his vows as the bear charges out of the bushes and attacks the moose calf. Onlookers in shock pull out their phones to record and commentate on the wild scene unfolding before them.

Wildlife experts say that if you’re going to have a wedding ceremony in a national park or any wild land then there’s a chance that wildlife will interrupt the event and sometimes even “steal the show.”

The wedding took place on August 18th beside the tourist-popular Two Medicine Lake where there is the perfect backdrop of lush green trees and glassy waters for the ceremony.

Watch Footage Of The Bear Attacking The Moose Calf Below