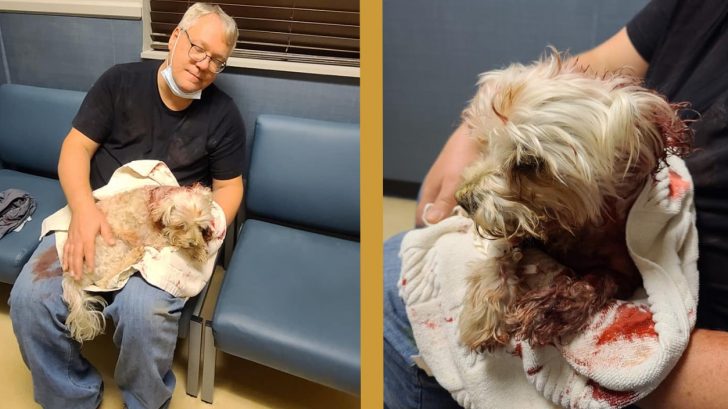 A pastor in the state of Pennsylvania rescued his dog named Peyton Manning from getting attacked by a black bear. It happened after the dog was let out of the house to relieve himself.

56-year old Rev. Tim Stradling said he let his nine-year-old Maltese/silky terrier mix out around 10pm – shortly after that, he heard Payton barking. At first, Tim thought it was barking at a deer that often stopped by the property, but something didn’t seem right, so he went outside to take a look. To Tim’s surprise, he saw his beloved pet’s neck in the mouth of a medium-sized black bear and it didn’t look good for Peyton.

“I just had the thought of how is he being bit there. Is he on the back of his neck or around his neck?” Newsweek reported Tim saying. “To drop it [the dog] was my goal.”

The pastor screamed at the bear and tried to make himself look bigger, but that wasn’t working. At this point, he began to run towards the bear but he backed away once he got a little too close. Fortunately, the bear got concerned about Tim being so close that he let go of Peyton. The bear ran off into the woods and Peyton ran off in another direction, both of them into the darkness.

Tim said,“It all happened in a matter of two minutes.”

He began to look around for Peyton and thought the encounter was over but the bear came back to the property to look for the dog. Tim fell in the yard looking for Peyton and his wife came outside and yelled at the bear. Fortunately, the bear ran off and did not return again.

The couple eventually found Peyton hiding underneath a car and quickly wrapped him up in a t-shirt and took him to the veterinarian to be treated. He had a fractured leg and a puncture wound in his neck.

Tim said, “The back of his neck is like a row of teeth.”

The dog is expected to recover and Tim said he feels lucky that his dog made it through with just minor injuries. He’s said he’s lived in the area for over 17 years and that was the second bear he’s ever seen there.

Wildlife officials say that it is extremely rare for a bear to attack a human in Pennsylvania, however, it is that time of the year when they are coming out of their dens and are very hungry. Officials say it’s best to turn on your lights when you go out at night and make noise so if there’s a bear around it will most likely leave.

Video Interview With Dog Owner Below