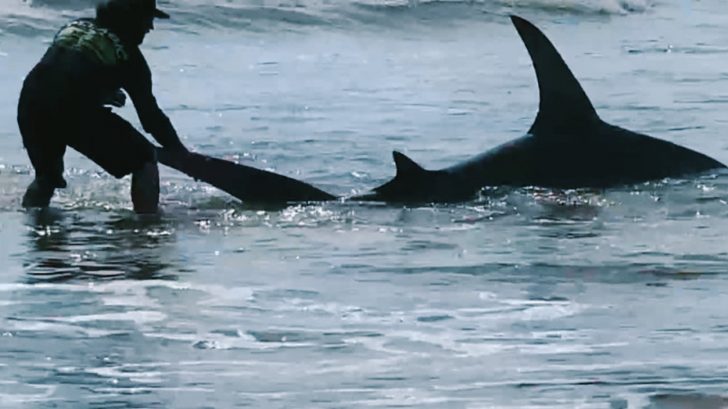 On September 1st, 2020, beachgoers at Caswell Beach on Oak Island, North Carolina witnessed a massive fin in the ocean moving towards a man standing in the water.

“We were on Caswell Beach on Oak Island and just at the beach for five minutes at the start of our vacation before Samantha, my 12-year-old who recorded the video, noticed a fin coming closer to the shore,” WMBF News reported Samantha’s mom saying.

12-year-old Samantha Wong started recording the shark once it got into shallow water about three inches deep. They told See it, Snap it, Send it, who they submitted the video to, that they were worried about the man’s safety. It wasn’t long, however, when they realized the man was actually a fisherman and he had a hammerhead shark on the end of his line.

“We were bystanders on the beach and weren’t involved. The shark took a bite of the bait on the fisherman’s line. Once caught, the fisherman pulled the shark into shallow water so they could cut the line,” Samantha’s mother explained.

After the line was cut, bystanders jumped in the water to help the fisherman pull the hammerhead back into the ocean. They all worked together pulling on its tale and pushing it against the oncoming waves. Eventually, they got the shark into deep enough water where it could start swimming and even though the shark was exhausted, it began to bring itself back out to sea. Take a look at the video below.