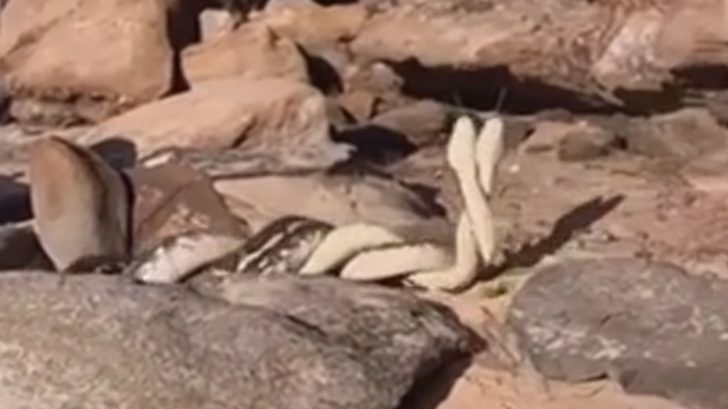 7NEWS Sunshine Coast shared a fascinating video of two snakes doing a combative dance on a beach in Queensland, Australia.

“A beachgoer got more than he bargained for on a morning walk at Point Cartwright when he stumbled across two snakes in combat,” 7NEWS Sunshine Coast reported.

According to the post, the beachgoer spotted the two male carpet pythons intertwined on the sandy beach and started filming them mid-duel. They wrapped around each other, continuously trying to slam the other one to the ground.

As the beachgoer filmed them, he panned the camera towards a huge rocky cliff that looked about 30-plus feet high and said the snakes actually fell from the cliff during battle.

Not only did the snakes somehow manag to survive the fall, but they also continued to duel after they fell. In fact, they apparently were so into the battle that they didn’t seem to mind that he was there filming them just a few feet away.

“Welcome to Australia,” the man said in the video. “How cool are these guys? They fell from way up there on that cliff,” he added, as he pointed the camera at the cliff.

He walked around the non-venomous snakes for a good two minutes filming before ending the video. Check out the fascinating footage below!