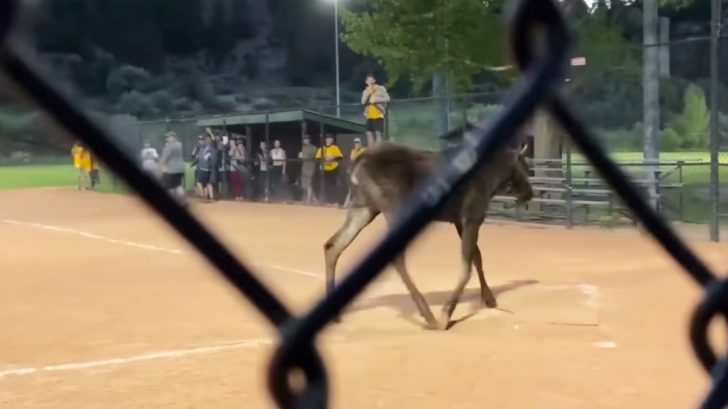 Tracy Kubarski from Steamboat Springs, Colorado was attending a baseball game when a massive moose decided to interrupt the game.

“An inquisitive moose interrupts a game Wednesday night at Howelsen Hill in Steamboat,” Steamboat Pilot & Today wrote on Facebook about the incident.

Video footage filmed by Tracy shows the moose marching across the field with the players on it. At one point, it looked like the moose was charging towards an individual in the outfield, and that person took off running to try to join the rest of the team.

The moose stopped chasing the player but didn’t want to leave the field. It continued to run circles as everyone scattered off the field to safety while a few of them stayed to try to scare it away.

The moose eventually chased everyone off the field and once that was done he walked over to homebase, placed a hoof down on it, and then took off sprinting off the field.

Colorado Parks and Wildlife said if you encounter a moose there are a few things you need to know. First, a sign that a moose is aggressive is its ears will lay back. It’s also a sign it’s aggressive if the hair on the back of its neck stands up or if it starts licking its snout.

Secondly, be cautious when walking your dogs and keep them away from the moose because they can get aggressive if they see them.

Finally, if a moose starts charging at you, run as fast as you can and try to put a large object between you and the moose, such as a boulder, car, or tree.

Go ahead and click on the video below to check out the rest of the footage.