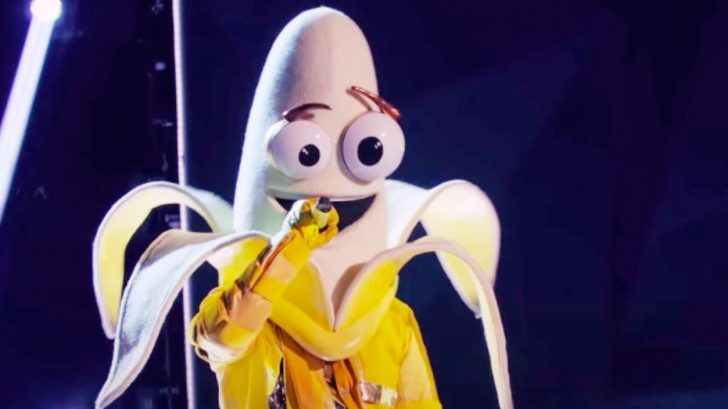 After advancing all the way to the Top 7 on The Masked Singer, the Banana’s identity was finally revealed when he lost the “Smackdown” round and was forced to peel off his mask.

Banana competed against Kitty in the Smackdown, and sang “Brick House” by The Commodores.

The famous funk song was a departure from the Banana’s usual style. Throughout his time on the show, the Banana leaned toward songs with a rock and roll vibe, such as Lynyrd Skynyrd‘s “Sweet Home Alabama” and Billy Ray Cyrus‘ “Achy Breaky Heart.”

Even when he sang different types of songs, like Bill Withers’ “Lean On Me,” viewers could tell that the Banana sounded like a rock artist.

Many people felt from the get-go the Banana was Poison frontman Bret Michaels. This theory held strong throughout the season, especially after the Banana delivered his first performance of the night on the 4/22 episode.

This time around, Banana opted to sing Bob Dylan‘s “Knockin’ On Heaven’s Door.”

Sharon Osbourne was a guest judge during this particular episode of The Masked Singer. Just a few seconds in to the Banana’s performance of “Knockin’ On Heaven’s Door,” she too, felt confident he was none other than Michaels.

Sure enough, after the Banana competed in the Smackdown round, and lost, he was revealed to be Michaels!

Fans reacted to Michaels’ performance of “Knockin on Heaven’s Door” and his later unmasking on Twitter. A few people mentioned how they felt 100% confident the Banana was Michaels after hearing Osbourne express her belief he was the person behind the mask.

Darn, people, there are no rockers on the panel for Masked Singer, obviosly. It took Sharon Osborne to tell them all that Banana is Brett Michaels.

watching the masked singer last night – me – "I have no idea who the rest are. I'm giving up"
*Banana starts playing the piano and singing*

Thank you, I've said Bret Michaels was the banana since the beginning #maskedsingerfox @MaskedSingerFOX

Now, tune in to the clip below to see Michaels perform “Knockin’ On Heaven’s Door” as the Banana. If you didn’t already know he was the person behind the mask, would you have guessed it was him based on this performance?

We hope Michaels had a fun time competing on The Masked Singer this season. It was certainly fun to watch him!