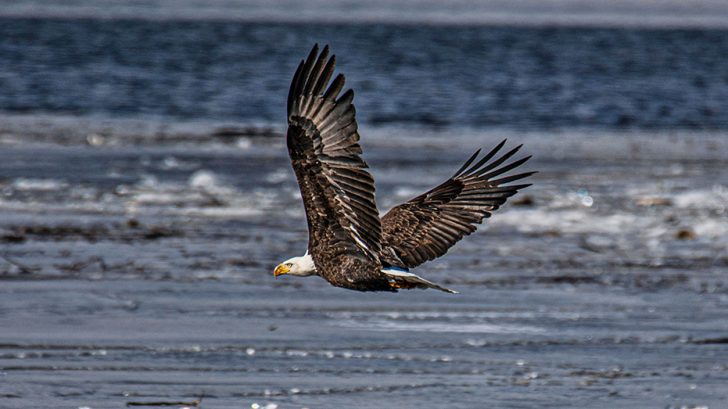 Officials in Michigan have confirmed that a bald eagle launched an airborne attack on a state-owned drone while it was documenting shoreline erosion damage in the Upper Peninsula.

After fighting with the drone while in the air, the bird ripped off one of the propellers and sent the entire thing to the bottom of Lake Michigan. The drone was being operated by drone pilot, Hunter King for the Michigan Department of Environment, Great Lakes, and Energy (EGLE) when the July 21, 2020 attack occurred.

According to a statement from EGLE, King was mapping shoreline erosion for use in documenting and helping communities cope with high water levels.

King was on his fourth day in the area and had completed about seven minutes of the mapping flight when satellite reception got spotty. He pressed the “Go Home” recall button to have the drone automatically come back to him. On its way back to King, it reacquired a strong satellite feed then suddenly it began spinning furiously out of control.

King was unaware of what happened. He looked up, saw the drone was gone, and a bald eagle was flying away. A nearby couple, whose pastimes include watching the local eagles attack seagulls and other birds, later confirmed they saw the eagle strike something but were surprised to learn it was a drone. Both King and the couple said the eagle appeared uninjured as it flew from the scene of the crime. They were unable to reacquire the drone from the water.

EGLE said the attack could have been a territorial squabble with the electronic foe, or just a hungry eagle. Or, maybe it did not like its name being misspelled. Regardless, EGLE’s drone team is looking at steps to reduce the possibility of a repeat attack, including possibly using “skins” or other designs on the aircraft to make them look less like seagulls which are a common snack for the magnificent bird.

Watch the video below to see some different eagle-vs-drone attacks.