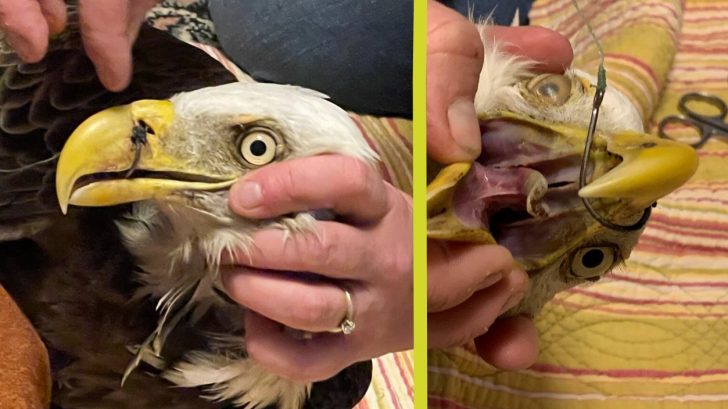 Driver Engineer Jerry Brown for the Pasco County Fire Rescue Station 21 heard a knock on his station’s door around 4pm. As he opened it, he found two kids with a bald eagle in their hands that was barely moving and had a fishing hook pierced through its beak.

The eagle also had fishing string wrapped around its wings and body preventing it from flying. It was malnourished, dehydrated, and underweight, and judging by the condition it was in, the eagle appeared to not have eaten in days.

Kris, the Owl’s Nest Director, removed the hook and treated the eagle and things have appeared to go well. He said that they will temporarily keep the bird until it’s fully stable and then it’ll be transported to Busch Gardens for further treatment.

“Thankfully the Eagle appears in good health, and veterinarians believe that the Eagle will fully recover. After the Eagle is cleared from Busch Gardens, it will be released back in the area of Station 21,” Pasco County Fire Rescue concluded on their Facebook post.