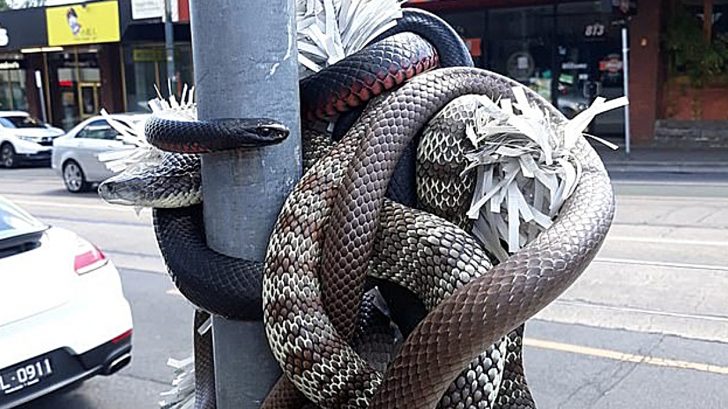 A backpacker named Maxime Zimmermann was walking through Australia in the Christmas decorated city of Melbourne when he noticed three of the most deadly snakes in the world wrapped around a street sign.

Curious, he walks up to them to get a better look and takes a picture as seen above. At that moment, a man named Raymond Moser, who’s famously known as “Snake Man,” walked up to him with a fourth unknown snake and told him that they were his pets.

Raymond also informed Maxime that the snakes had their venom glands removed and were no longer a deadly threat to humans. One of the snakes wrapped around the pole is a tiger snake, the other is a red-bellied black snake, and the third snake is the notorious eastern brown snake.

When Maxime posted the picture to the Australian group they were just as shocked to see them and the post went viral catching a lot of media attention. Some people commented on the post that they cannot believe three of the most deadly snakes were together like that. Another person said he was in Australia and after seeing the picture was getting a plane ticket out of the country. While others said the snakes must be plastic and fake.

“Why are those three all together? Let alone all together up a lamp post in a city? I am Australian and this is the weirdest thing I’ve ever seen,” one Facebook user commented on the post.

Maxime assured them that they were real snakes and he has more pictures to prove it which he shared in the comments. Australia definitely has the most concentrated amount of venomous snakes on the planet and you can learn more about them in the video below.