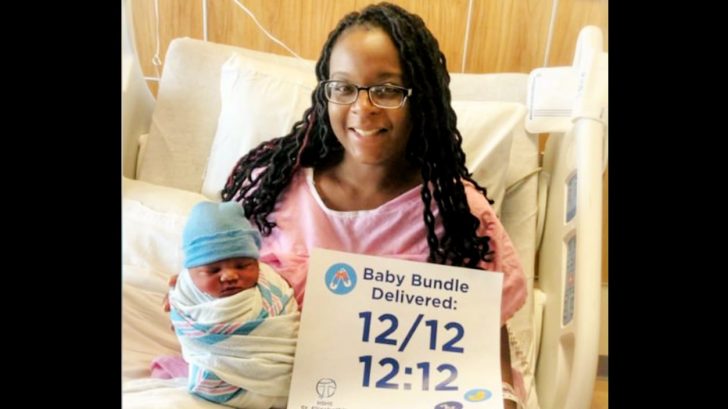 Denarrika Fisher wasn’t due to give birth to her baby boy until December 30, according to the HSHS St. Elizabeth’s Hospital in O’Fallon, Illinois. But her son decided to arrive a little early, and in doing so, he was born at a remarkable time.

Denarrika gave birth to her son, Denarius, at precisely 12:12 AM on December 12. The hospital issued a statement about his birth, saying Denarrika didn’t even realize her son’s birth date and time were matches.

“Fisher didn’t realize the date and time being the same at the time but the nursing staff in the Women and Infants Center did when they noted the birth information when the baby was delivered,” the statement read, as quoted by FOX 5 News out of New York.

What made Denarius’ birth all the more extraordinary is the fact he was also born during the last full moon of the decade.

Baby born at 12:12 am on 12-12 during last full moon of the decade https://t.co/QBtMSOQyYf pic.twitter.com/oWSS2DKFWd

That moon peaked at precisely 12:12 AM on 12/12, the exact date and time of Denarius’ birth. A report by FOX 5 News out of Atlanta described the decade’s last moon, saying it would have “high trajectory across the sky and sit above the horizon for longer than usual.”

The moon was also called the “Full Cold Moon” or the “Long Night’s Moon.” The Farmer’s Almanac says Native Americans gave the moon the latter nickname since it appears during some of the longest nights of the year, being so close to the winter solstice on December 21.

Even though baby Denarius wasn’t due to arrive until December 30, the hospital staff said he “decided to come early for this numeric and lunar coincidence.”

According to the hospital, mom and baby are now doing “wonderfully” since he was born.

You can learn more about his astonishing birth by watching the news report below.