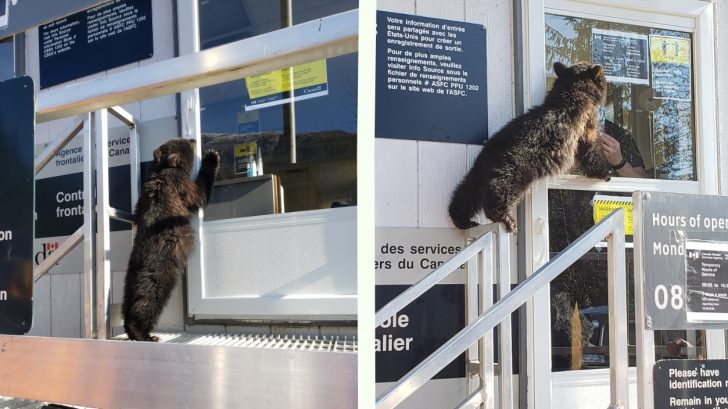 The Canada Border Services Agency shared some adorable photos of a bear cub trying to cross the Canada-U.S. border between Stewart, B.C., and Hyder, Alaska.

“A traveller sought entry for essential reasons, but had no travel documents. After a forceful attempt on its part to cross the border, our officers moved quickly to apprehend and transfer it to the Smithers’ Northern Lights Wildlife Society for the winter,” Canada Border Services Agency wrote on Facebook.

The border patrol took pictures of the female cub as she climbed around on the guard tower peeking in through the windows and climbing on the railings and signs. Eventually, wildlife authorities were called and came out to trap the bear. They said they had been searching for this bear for over a month now.

“She kept eluding us … one day we got the call and she’s at the border and trying to get in there,” CBC reported Langen saying, the man who dispatched an animal trapper to the scene.

The animal trapper mentioned that capturing the cub was easy. He put the trap out and she quickly went for the food in it. It appeared she had not eaten for a while and was very hungry. Angelika Langen with the Northern Lights Wildlife Shelter said the reason the bear was there in the first place was because she was probably looking for food.

“She was in the trap within minutes,” Langen said. “She was so hungry, she thought that was just a great place to go.”

The cub will be taken to an animal shelter throughout the duration of the winter due to it not weighing enough to survive the winter on its own. In the meantime, the Canada-U.S. border is still closed to non-essential travel.

Watch Some Other Adorable Bear Cubs Play In The Video Below