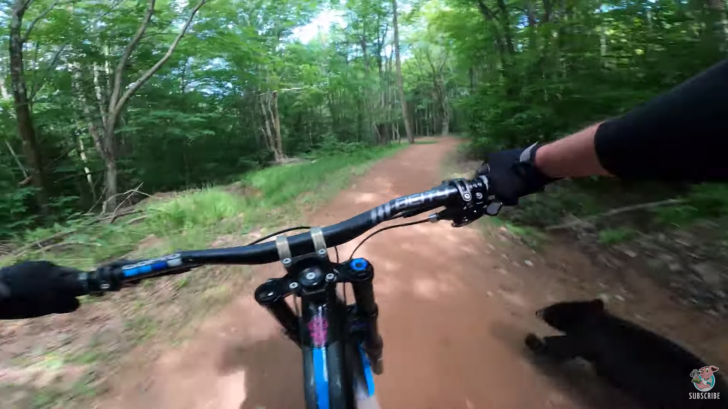 David Smith was mountain biking through Snowshoe Bike Park in West Virginia when he found himself crossing paths with a baby black bear.

“We had heard there were a lot of sightings of a momma and two cubs on that mountain in the bike park area,” David told USA Today/For The Win Outdoors.

The mountain biker said he was riding down Skyline Trail and wearing a body camera recording his journey when it all went down. The video showed David moving at a fast pace down the trail when out of the right side of the screen we see two baby bears running out of the bush.

One of them dashed off back into the brush, but the other one ran at full-sprint alongside David for a few feet down the trail. Eventually, the baby bear bolted in front of him and took off into the bush on the other side of the trail.

“My first thought was exactly what you hear me say in the video,” David said. “I was excited to see the bears, initially thinking they would just run away from me and then I was extra blown away when the one cub started running alongside me.”

Fortunately, the mother bear was nowhere in sight and he didn’t get attack by her trying to protect her cubs.

“I did think I may collide with the cub, so I slowed down to try and let him safely get across the trail. I didn’t want to run the cub over at full speed and I didn’t want to get knocked over on my back or go too slowly in case the momma was coming behind me,” he said.

The footage was uploaded to Viral Hog’s YouTube channel and you can view it below.

Watch Footage Of The Biker & Baby Bear Below