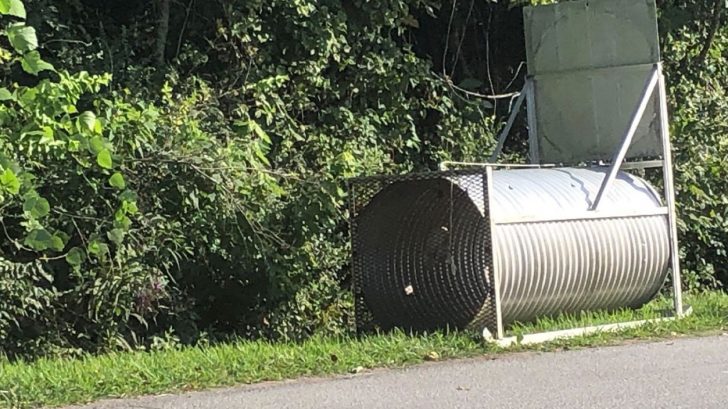 A lookout alert was issued by the Knox County Sheriff’s Department after several reports of a tiger being spotted in southeast portion of the city on September 10, 2020.

TIGER TALK: Helicopter flying overhead in the area of the Forks of the River Industrial Park a few minutes ago.

A helicopter was used last night to try to coax out the tiger possibly seen. UT Zoo Specialist tells me it likely hunkered down under a bush, stayed put. @6News #WATE pic.twitter.com/dHGvBI41TM

Knox County Sheriff’s Office Patrol Units, Animal Control, Air Watch, the Tennessee Wildlife Resources Agency, Knoxville Police’s Animal Control Unit and representatives with Tiger Haven were working Wednesday night, September 9, 2020 to locate the tiger after it was spotted by a Knox County deputy in the Forks of the River Industrial Park off of Island River Drive.

TIGER TALK: The trap for the Tiger spotted in #Knoxville is a humane bear trap and hanging inside is a “grocery store chicken”

This area where it was spotted is dense with foliage, but there is a water source near it — which is helpful for the Tiger, if you’re curious. @6News

Aside from teams of people searching on the ground and helicopters searching from the air, experts have set up a trap to try and capture the tiger in the most humane and safest way possible. The trap being used is normally for catching and relocating bears. It consists of a large galvanized steel tube with doors on each end that lock closed as soon as the animal enters. The tasty snack being used to lure the tiger is a whole chicken from the grocery store.

Watch the video below for the latest update.

Who’s been keeping up? https://t.co/fgd9FWpTey