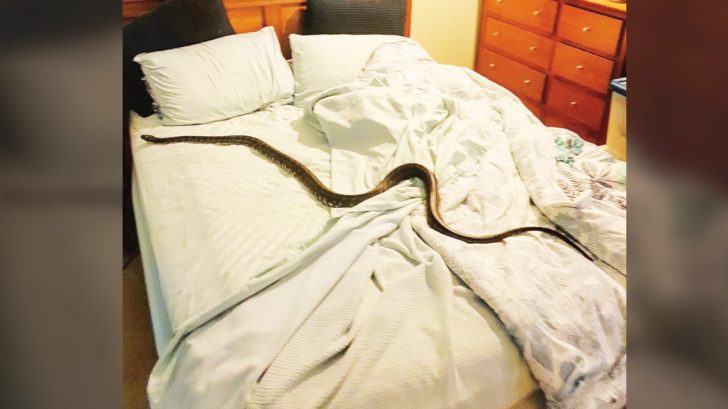 Imagine this…you come home from work or a night out with friends. You go about your usual routine and put away your keys, hang up your jacket, and walk into your room.

Only when you turn on the bedroom lights, you discover a massive snake has made itself at home in your bed. That’s the exact scenario that played out in an Australian woman’s life when she returned home one evening.

“Lets [sic] just say there was a lot of yelling and screaming,” Stuart McKenzie of Sunshine Coast Snake Catchers 24/7 wrote in a post on Facebook alongside a photo of the snake.

The woman ran out of the house and refused to go back inside until the snake was gone. She called Sunshine Coast Snake Catchers 24/7 to remove it from her home.

Huge Snake in Your Bed! ?This would have to be the thing of nightmares for alot of people and unfortunately for a…

As McKenzie wrote in his post, the snake that slithered into the woman’s bedroom was quite the monster…it was a seven-foot carpet python!

McKenzie told The Dodo that although the snake was “chilling on the bed” when the woman came home, it moved by the time he arrived. It took him a little while to locate the snake, but he finally found it.

In his Facebook post, McKenzie said he found “a rip in the fly screen on the front door,” and figures that was “the only way it could have entered the house.”

The snake was safely removed from the home and taken back outside to roam free.

This isn’t the only time that a massive snake has turned up somewhere unexpected. In the summer of 2018, an Australian man found a nine-foot python in the rafters of his garage. He took the snake outside, but it continued to return.

The man went on to name the snake “Dirk,” and filmed him as he slithered up the outside walls of his garage. You can watch a news report about all of that below.

How would you react if you found a huge snake in your bed or garage?