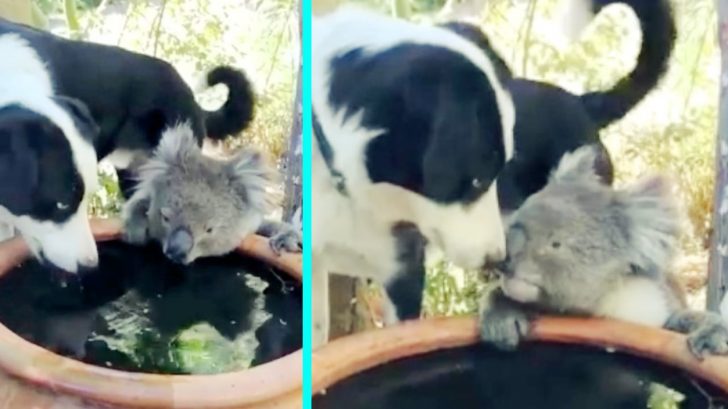 The fires that have raged throughout Australia have left great devastation in their wake. Millions of animals have perished in the blaze, while many others have been severely burned or injured.

Even the animals who aren’t in the thick of the fires have felt its effects, as temperatures have gone up across the continent.

Koalas, which are typically known for being reclusive, have been actively seeking out help from people they encounter. One viral video shows a koala climbing up a woman’s bike while happily taking a drink from her water bottle.

The woman, named Anna, spoke to 7 News in Australia:

“As I was giving him a drink from our water bottles, he climbed up into my bike,” she said. “I’ve never seen a koala move this quickly. They’re usually not people animals, they stay up on the trees and people admire them from afar.”

Temperatures were near 108 degrees Fahrenheit that day in Adelaide, which is where Anna had her koala encounter.

Also in Adelaide, another koala has found a source of water in a family’s backyard.

Riley and Olivia Stone have seen this koala before, and say he is actually a regular visitor to their yard. The koala, who they affectionately call “Quasi,” will lounge on their veranda or in a tree in their backyard. They’ll yank down eucalyptus leaves and leave them on the ground for him to eat whenever he comes down.

Quasi also has a habit of coming up to the house to get a drink on hot days. With temperatures being so high during the fires, Quasi has been quenching his thirst in the family’s backyard fairly often.

And he doesn’t seem to mind the fact that he has to share a water bowl with the Stone family’s pet dog, Rusty. Family member Jasmine Stone filmed Quasi and Rusty sharing a drink, and the video is so heartwarming to see.

I think we humans need to learn from this koala and this dog. We share the same water. #always https://t.co/MgRZYZt4te

The Stones’ neighbor, Andrew Frost, posted the video on Facebook, and it quickly went viral. As of press time, the video has been shared over 138,000 times.

You can catch that video below to see Quasi and Rusty’s adorable interaction. As Andrew wrote when he captioned the clip, the two animals “are mates,” so it makes sense why they wouldn’t mind sharing the same water bowl!

My neighbours Kevin and family have a resident Koala that comes down for a drink when it is really hot. Down yesterday and today. Riley Stone and Olivia Stone have a dog, Rusty, who knows the Koala pretty well and they are mates (buddies for you in the US) – here they are hanging out filmed by Danielle Stone . The family has some great videos of this lovely animal. (Yes the country is on fire, climate change is real and many politicians are in denial but nice to post something smiley). We can pray for more enlightened leadership in the future! PS Been a tad of interest in this post (180K views so far) so I have updated it to get the attribution correct.