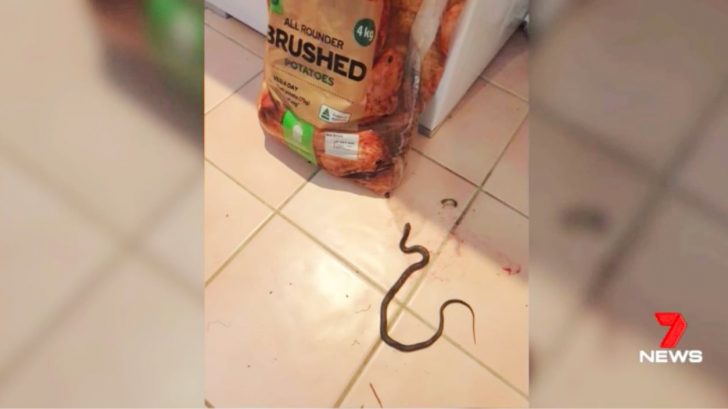 One Australian woman got the shock of a lifetime when she opened a sack of potatoes and discovered a snake was inside. To make matters all the more terrifying, the snake was alive!

Marissa Davidson bought a 4 KG (8.8 LB) bag of potatoes from a Woolworths grocery store in Coffs Harbour on Friday, March 6. Once she got home, she reached in the sack to pull out a few potatoes, and that’s when she found the snake.

“I opened it and I grabbed two potatoes out, and I was like, ‘Oh no, I’ll do three’ and turned around to get the other one and it jumped out,” she told nine.com.au.

Marissa immediately feared for the safety of her five-year-old son, Chase, as the snake started moving toward him. The situation would have been terrifying enough for any parent, but Marissa had added fear knowing that Chase has a congenital heart defect.

A Coffs Harbour mother has had the fright of her life, opening a bag of potatoes she'd just bought only to watch a snake jump out. Even more worrying, it slithered straight towards her son who has a heart defect. www.7NEWS.com.au#CoffsHarbour #7NEWS

“He has got hypoplastic left heart syndrome, which is half a heart, and it could have made him very sick,” Marissa said about the snake.

A mother has had a terrifying experience after buying a bag of potatoes from Woolworths and finding a live snake inside. #9Newshttps://t.co/lPNokNenOf

Marsh snakes are indeed venomous, so Marissa was right to be concerned. However, Stuart advises anyone else in her situation to call a professional to wrangle a snake, rather than attempt to do so themselves.

Oddly enough, this isn’t the first time someone has found a snake inside a sack of potatoes they bought from the store. And it doesn’t just happen in Australia!

In 2013, a Pittsburgh woman found a nearly four-foot-long snake in a bag of potatoes she purchased at Wal-Mart. You can learn more about that past incident in the video below.

Now you’ll definitely think twice the next time you reach into a sack of potatoes!