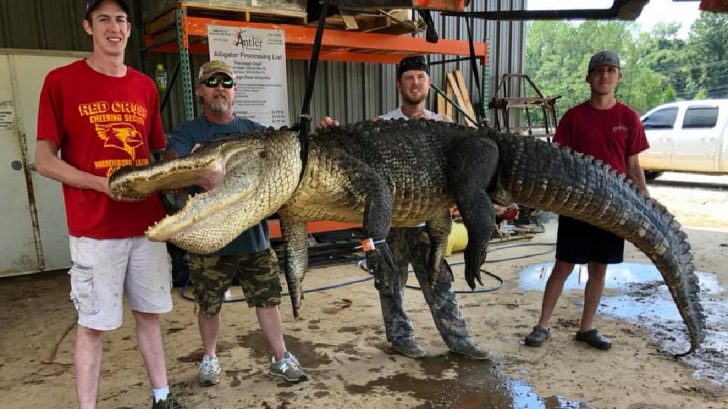 A Yazoo City, Mississippi, man made a discovery unlike anything he’d seen before while cleaning a 13-foot 5-inch, 750 pound alligator recently.

Shane Smith, owner of Red Antler Processing, discovered two items inside the belly of the gator that were so rare that he hesitated to share the news on Facebook out of fear of people not believing him. But, changed his mind after giving it some thought.

After opening an alligator that had been harvested at Eagle Lake near the Mississippi/Louisiana border, he found numerous items often found in hunted gators, including bones, hair, feather and stones. But, then something caught his eye that had him taking a closer look.

As he removed items from the gator he placed them in a bin.

“I looked over and saw a rock with a different tint to it. It was the arrowhead,” Smith said of his surprising discovery. “It was just disbelief. There’s just no way he had an arrowhead. Your first thought is it ate (a Native American) or (a Native American) shot it in the stomach.”

Smith knew that it was more likely that the beast gathered the arrowhead in his mouth along with other rocks. And, as crazy as the arrowhead find was, he got another surprise when he found a “heavy, tear-shaped object roughly 1 1/2 inches in length.” Smith and John Hamilton, the hunter who killed the alligator, suspected that the object may be a lead weight used for fishing.

“It’s heavy like lead,” Hamilton said. “It looks like it’s got two holes in it, but they don’t go through it. It’s got a little hole and a bigger hole on top. I guess it goes in and comes back out.”

James Starnes, director of Surface Geology and Surface Mapping for the Mississippi Department of Environmental Quality, said the item is known as a plummet and dates back to the Late Archaic Period, or about 1700 BC.

“The plummets, we really have no idea what they were used for,” Starnes said. “These things had some significance, but we have no idea. We can only guess.”

Starnes also studied a photo of the arrowhead and estimated that it wasn’t an arrowhead at all, but a point used on early weapons dating back to about 5000-6000 BC.

“That’s an atlatl dart point,” Starnes said. “People think all heads are arrowheads, but those (arrowheads) would be the little bitty points.”

The real question is, how did these centuries-old artifacts get into the alligator’s belly? Ricky Flynt, Mississippi Department of Wildlife, Fisheries, and Parks Alligator Program coordinator, explained that hard objects, typically stones, aid the reptiles in digestion.

“Alligators, like other animals such as birds and other reptiles, are known for ingesting grit and rocks to help with digestion,” Flynt said. “We know alligators and crocodiles do that.”