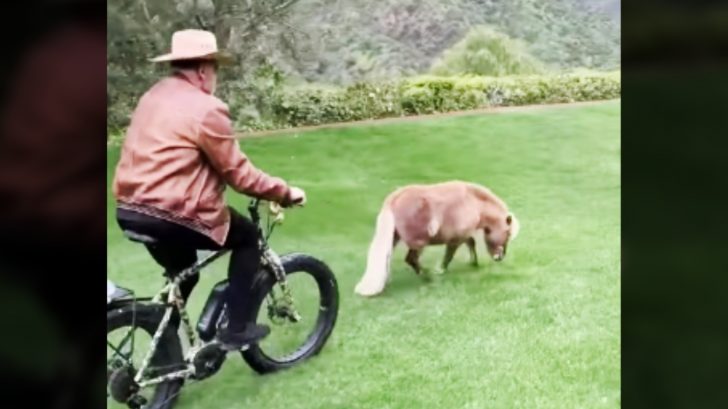 To most people, whiskey is their beverage of choice, but to Arnold Schwarzenegger, Whiskey is the name of his beloved mini horse.

‪#NationalSelfieDay wouldn’t be complete without a cameo by Whiskey. ‬

Schwarzenegger moved to America from Austria in 1968 at the age of 21 and became mega-famous in the bodybuilding world and became a superstar thanks to his transition into acting shortly after.

He dreamed of moving to America since he was 10 years old, so when he became a citizen, he considered it one of the “proudest moments” of his life.

Get out and vote today. For bonus inspiration, here is a picture of one of my proudest moments, the day I became a citizen.

Along with becoming a citizen, Schwarzenegger fully embraced his new American culture and that included country music. Based on his social media posts, he is a huge fan, and he also loves rocking a cowboy hat and has an extensive cowboy boot collection.

It's been a year, so it's time for my annual boot cleaning. One thing you learn in sports is the importance of follow-through. Starting something isn't enough – you have to finish. I've collected these boots since I moved to America. The follow-through is conditioning them every year.

Whiskey, his pet mini horse, became a member of Schwarzenegger’s family, and he even calls her his “little girl,” as you can see in the video below.

Even Whiskey got a shirt. #comewithmeifyouwanttolift

Posted by Arnold Schwarzenegger on Monday, May 2, 2016

Like any animal, Whiskey needs to get a certain amount of exercise. As you all know, the former Governor of California enjoys exercise, so of course he would be joining her! Luckily, he filmed it for us all to see.

Wearing a cowboy hat and brown leather jacket, he chased Whiskey around his huge backyard on a bicycle, and captioned the video, “Even Whiskey has a morning fitness routine.”

The two looked like they were having so much fun! What made the video compilation even better was that Toby Keith’s “Should’ve Been A Cowboy” was playing in the background.

Watch the amazing video below.

Even Whiskey has a morning fitness routine.