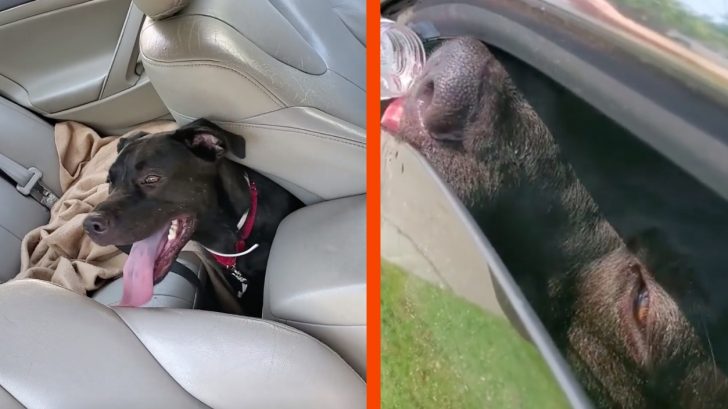 Army veteran Jason Minson from Norfolk, Virginia rescued a dog that was about to die from overheating in a car after it was left there to roast in the peak of a hot summer day.

Jason said he owns and operates a landscaping company and was working when he noticed the dog heavily panting in the backseat of the car. He immediately called 911, as well as animal control officers to come to the location for assistance.

As he waited beside the car to keep an eye on the poor pooch and to see if the owner would reveal themselves, the dog in the car continued to show signs that it wasn’t going to make it much longer if someone didn’t do something.

With the authorities taking too long, Jason decided to give the dog water through a crack in the window to help it cool off a bit. He and another lady he was with went through two water bottles in attempts to cool the dog off, but still, it was looking very dire for the pooch.

It got to a point where either Jason keeps waiting for the police and the dog dies, or he breaks the window himself and saves the dog from overheating. Jason’s phone was filming and you can hear him say that he’s not going to wait any longer. At this point, he decides to take matters into his own hands.

Jason breaks the window and gets the dog out of the car as an animal control officer arrives on the scene and takes the dog to place it in her truck that had a kennel built into it. The police finally arrive and they give them the details of the situation and quickly rush the dog to a veterinarian to save its life.

Fortunately, in the end, Jason was not charged for breaking the dog owner’s car, who was later identified as Kymoni Symone Beverly. However, Kymoni was charged for animal cruelty and was asked to appear in court, in which she did not, and was found guilty and fined $250.

Thank you Jason for going out of your way to save this dog’s life. If it was not for your heroic action, this pup may have suffered the fate that many dogs suffer due to poor caretaking.

Jason Minson wrote on Facebook, “Ok, so I normally don’t get serious on Facebook but this is REAL talk people. It’s hot out and if you leave an animal in your car it’s going to die from the heat. In Virginia you will get charged with 2 felonies. If you do it and I see it you’re going to get your window busted out AND 2 felonies. The officers in Norfolk were doing their jobs correctly and were trying to get the dog without causing property damage and were about to call the fire department for assistance, but I honestly didn’t think this pup was going to make it and my job wasn’t on the line because of policy. TAKE CARE OF YOU’RE FUR BABIES!!!”

Watch the last footage of Jason getting the dog out of the car below.