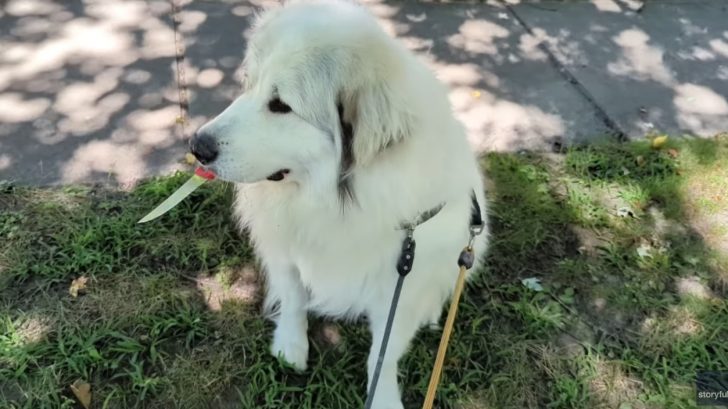 Matt Paprocki said he was walking his friend’s dog Theo, a fluffy and innocent-looking Great Pyrenees in Sylvania, Ohio when the dog picked up a knife and was waving it around in the air at him.

“I’m 42. I’ve owned dogs my entire life. Somehow I was totally unprepared for this moment,” Matt wrote in his caption to the video on Twitter.

Matt told Storyful that Theo had “shoved his face into a pile of sticks and branches,” and “I thought he grabbed a stick as usual. My eye caught the glint of metal, and it was instant panic.”

After noticing the sharp cutlery, Matt turned his phone’s camera on and towards the pup commanding the dog to drop the knife.

“Theo, drop the knife,” he said in the video.

I’m 42. I’ve owned dogs my entire life. Somehow I was totally unprepared for this moment pic.twitter.com/BtunqPUrwD

He told Storyful that Great Pyrenees are notorious for not letting go of things they find and it often takes some hard bargaining to get them to release.

“They need trades for something of greater value to them. I tried trading him for animal crackers, which I always take with me,” Matt told Storyful. “Didn’t work. Tried a good stick. Didn’t work. My concern was he was going to jump around and play with the knife.”

At this point, Matt said he decided to call the dog’s owner who worked around the corner and she came to save the day.

“Luckily she saw it, came within a few minutes, and ran into her house to get food to trade. Whipped cream didn’t do it. Salmon did. Theo dropped the knife, and she grabbed it,” Matt said. “Now we laugh about it. A little.”