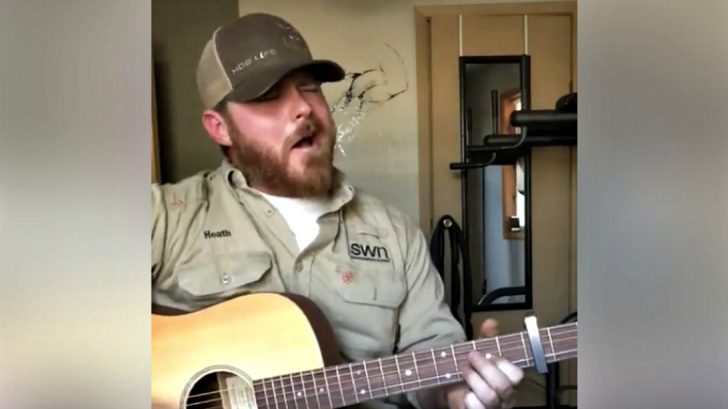 Heath Sanders, a field operator for Southwestern Energy in central Arkansas, was launched to superstardom after his stunning cover of Chris Stapleton’s “Either Way” went viral in 2018. Unlike most viral stars, Sanders’ story is unique in that it caught the attention of “The Most Influential Man In Country Music,” radio deejay Bobby Bones.

Upon hearing Sanders’ sing, Bobby invited him to Nashville to perform live in his studio for a panel of industry professionals. During Sanders’ appearance on the Bobby Bones Show, he sang a song that he wrote called “Bloodline.” The fan response was overwhelming, creating a huge demand for more music from Heath Sanders.

Advertisement
Following his appearance on the Bobby Bones Show, Sanders took a leap of faith and quit his oilfield job to pursue his musical dream. In the months since, he has signed management and publishing deals and it gearing up for a move to Nashville. Mark our words. Heath Sanders is on his way to being one of country music’s biggest stars.

I grew up in a little place called Zack Ridge just outside of Marshall AR. We lived in a little single wide a couple miles from the dairy farm my dad worked. There were dairy farms scattered all over Arkansas and most folks burned wood for heat back then so there was always work to be had, whether it was milkin, cuttin wood, fencin or haulin hay. We didn’t have much but we never wanted for anything. A man could make a good living.. It was a good time to be a kid. Things were simple and a dollar was worth something… the people were too. Thanks to my buddies Mark Irwin and Jay Brunswick for bein a part of this one. “Blood Sweat and Barbwire Fence”Y’all don’t forget to tune to The Bobby Bones Show at 9/8CT in the morning for the in studio update and performance of Down On The South! Powered by Cowboy CDJR!Quest Hunt Co

While his original music is worth dropping everything for, Sanders’ cover song performances are the true test of his talent. Few vocalists can give due diligence to such a vast array of styles and songs. But, Sanders does so flawlessly. One of our favorite cover songs from the Arkansas native is his take on Keith Whitley’s 1988 hit “Don’t Close Your Eyes.” Sanders’ Stapleton-esque voice give the familiar tune a soulful quality and makes it feel as though you’re hearing it for the first time.

Check out Heath Sanders singing “Don’t Close Your Eyes” in the video below. To keep up with Heath and to hear more of his music, follow him on Facebook by clicking here.