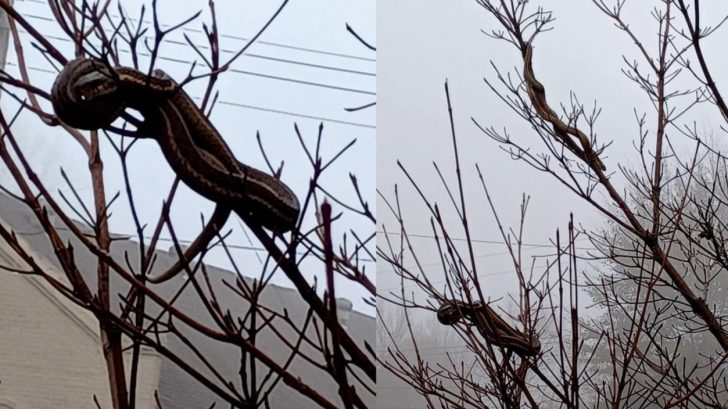 Rodney Cooper and his lovely wife Rebecca from Dell, Arkansas were a bit surprised after finding two large snakes slithering at the top of a tree in their yard on December 29th.

With it being around Christmas, Rodney figured snakes in his area were supposed to be hibernating and was confused as to why they were in the tree in the first place.

Astonished, Rodney took a couple of photos of the wild critters in the tree while his wife Rebecca asked him to remove them from the property.

According to THV11, Rebecca said, “Get thee behind me Satan!” when she saw the snakes.

“I couldn’t believe these snakes were in the Dogwood tree,” Rodney added.

Rebecca told the local news outlet that Rodney was going to get the snakes down from the tree and then take them to a ditch outside of town to release them.

However, after he got around to doing it about four hours later, the snakes had already slithered. Rodney believes the snakes must have slithered down the tree and off to a place where they would not be detected.

“Thus, they are probably still in our yard,” Rebecca said.