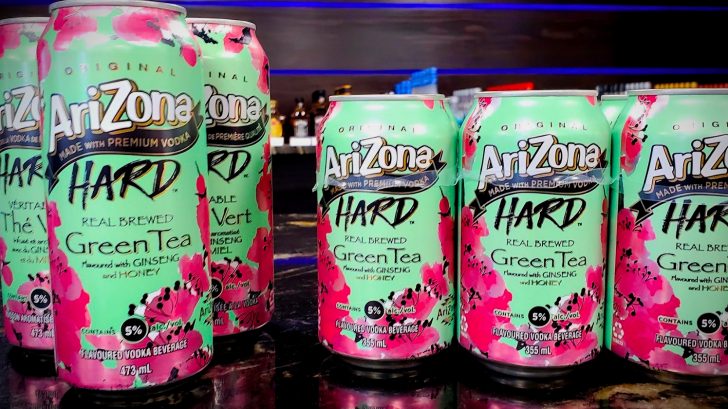 You know how popular hard iced tea is – and now, you’ll be able to get it in a familiar-looking can!

Iced tea giant AriZona is producing hard iced green tea this summer, and it’s predicted that this brand-new venture from the former beer company will sell out fast.

For some, this might appear to be a dramatic change from the company’s longstanding run as the king of teas…but, believe it or not, AriZona actually started out as a small beer distributor!

While hard seltzers have been dominating social media for the past couple of summers, a new front runner is about to enter the game.

The new product, AriZona Hard Green Tea, has  5% ABV, making it comparable to a strong beer and right in line with some of the most-famous seltzers (we’re looking at you White Claw fans.)

The product is currently only available in Canada, but hard iced tea enthusiasts predict that it will cross the border into the United States in the very near future.

This new offering isn’t simply a beer-based tea – it’s vodka-based, making it closer to the college student favorite Long Island iced tea than a beer. These new drinks that are formulated off of hard alcohol tend to have fewer calories and more of a boozy punch than traditional beer.

AriZona isn’t the only company venturing into the hard iced tea game this summer. Pabst Blue Ribbon recently announced the release of its hard peach tea. And with any luck, AriZona will expand this new product line to include some of their other popular flavors.

When you grab a drink this summer, it’s likely that it’ll have a little more flavor than a hard seltzer – hard iced tea is about to be king once again.

Check out the video below that tells the story of how AriZona became the megastar of the tea world after beginning in the booze market.