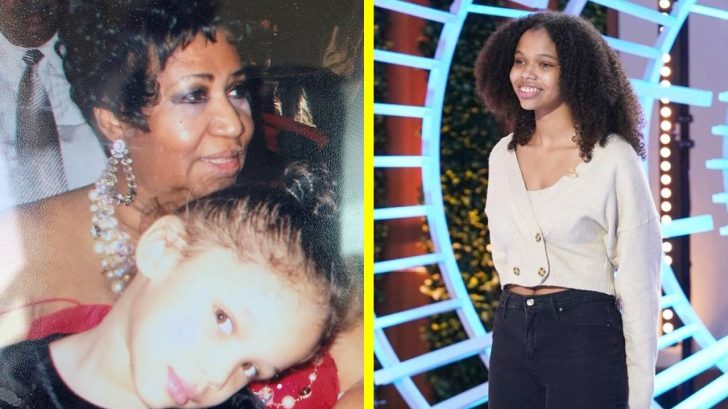 A new season means new stories, and new talent…and this 20th season is not disappointing! One of the many talented singers who auditioned was a 15-year-old girl named Grace Franklin. When she was asked how she got on her path to singing, Grace revealed that her grandmother is none other than the late Aretha Franklin.

Her father is Aretha’s son, Christian rapper Kecalf Cunningham, and he was at the audition with his wife Kafi, supporting their daughter. The teenager sang Lauryn Hill’s version of “Killing Me Softly” for the judges, who were in awe of a story she told about her grandmother before the audition began. Lionel actually had a close friendship with Aretha, so he brought up some of the times he spent with her. Having a famous lineage makes it hard for her to make her own mark.

“I feel like people expect me to sing exactly like her, but I am my own artist and I have my own voice,” she said in her audition.

The judges all agreed that she seemed nervous, and asked if she had another song. She said she had “Ain’t No Way,” which Perry said was “appropriate, seeing that it is a major Aretha Franklin hit.

After hearing her rendition of her grandmother’s song, the judges praised her vocal runs, but had doubts on her readiness for the competition at such a young age.

Lionel said she has to put in the time and work to “get it up to par” which Luke agreed. Both men said “no,” while Katy Perry gave her a “yes.” Katy was so passionate about her vote that she got up from her seat because she was so upset that one of her fellow judges wouldn’t side with her.

While she didn’t make it through this time, they encouraged her to come back again and Grace herself said on her Instagram that she had the best time and learned so much.

We think her grandmother is proud of her! Watch her audition below.