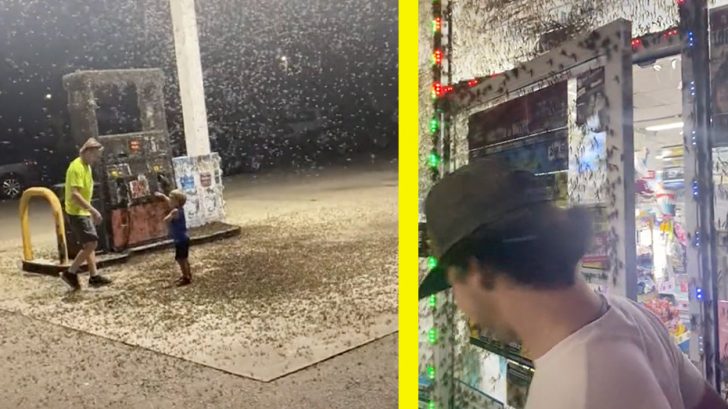 A TikTok video showing a massive swarm of mayflies at a gas station in Cedar Bluff, Alabama went viral with more than five million views. Ty Leo recorded the video after he had stopped to gas up his car at the Weiss Mart Marina when the swarm of mayflies descended upon him and the other customers.

The insects covered the walls, windows, floor, and all the pumps in incredible scenes, which even Leo himself admitted he had never seen before.

Leo shared the video clip he took to TikTok on Monday, July 5, 2021, saying: “Never in my life have I ever saw this many bugs ! Couldn’t even pump gas.”

Mayflies are harmless and can be found throughout North America and worldwide. Most of the nymphs develop in streams and rivers that are relatively clean. Mayflies spend most of their lives in the water as nymphs and then emerge as adults for only a short while. Adults will live only a day or so, but the aquatic larvae live for about a year.

In the video, Leo walks inside the gas station where a good number of the flies managed to get inside. He then steps outside and shows the size of a mayfly that lands on his hand. As the video continues, a father and son can be seen playing in the swarm of bugs.

Check out the incident in the video below.

Never in my life have I ever saw this many bugs ! Couldn’t even pump gas ? ##fyp##foryou ##bugs ##lakelife