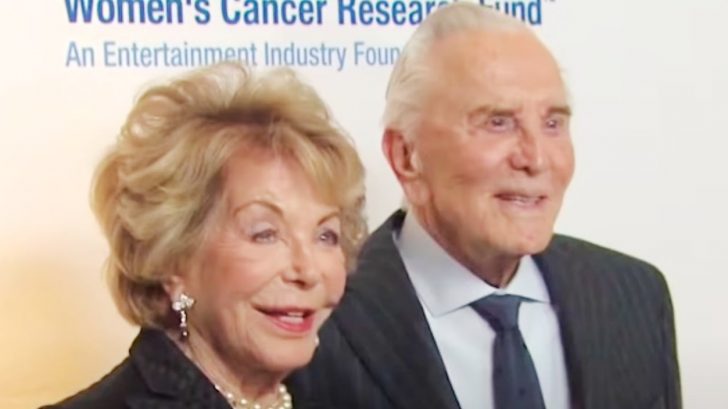 The past year has been a difficult one for the Douglas family.

Anne was born in Hanover, Germany on April 23, 1919. Her family moved to Belguim, where she became a citizen. She eventually married a Belgian man named Albert Buydens.

Kirk and Anne met when Anne was still married to Albert. Kirk had divorced his first wife, Diana Dill, in 1951 (they shared two sons, Michael and Joel). When he met Anne, Kirk was secretly engaged to Italian actress Pier Angeli.

The two’s relationship started out as a professional one. Kirk offered Anne a job as an assistant, which she initially turned down. But she eventually changed her mind.

“She finally agreed to work with me on a trial basis, making it clear our relationship would be strictly business,” Kirk recalled in a book he co-authored with Anne, titled Kirk and Anne: Letters of Love, Laughter, and a Lifetime in Hollywood.

Even though their relationship started in a professional capacity, Anne wrote how she started feeling like she “could fall in love with [Kirk].”

Anne and her husband divorced, and Kirk never married Pier. As Anne suspected, she ended up falling in love with Kirk, and he fell for her too.

Unfortunately, Eric died in 2004 of an accidental drug overdose.

Anne became the president of Kirk’s independent film outfit, the Bryna Company. She also was credited as a producer on two of Kirk’s films, Peg Leg, Musket & Sabre and Posse.

Now, just a little over a year after Kirk’s death, Anne has passed away as well.

The Hollywood Reporter confirmed Anne died on Thursday (April 29) at her home in Beverly Hills. She passed away just six days after celebrating her 102nd birthday.

“She brought out the best in all of us, especially our father,” said Anne’s stepson, Michael. “Dad would never have had the career he did without Anne’s support and partnership.”

“Our loving matriarch Anne Douglas is now in the arms of her beloved husband Kirk,” Catherine wrote. “102 formidable years old.”

You can read Catherine’s full tribute to Anne below.

Those wishing to honor Anne’s life and legacy can do so by making donations in her memory to the Anne Douglas Center at the Los Angeles Mission. May Anne rest in peace.