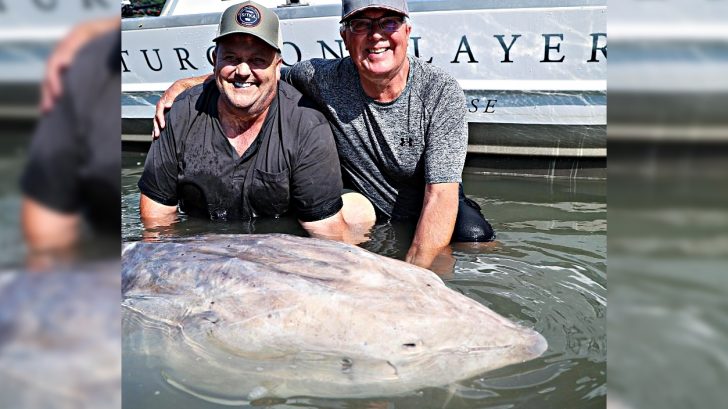 Kevin Estrada, a Chilliwack fishing guide was out on the water in Frasier Valley, Canada with Former NHL goalie Pete Peeters and his buddy Jake Driedger when they captured a potential world-record-breaking sturgeon.

It happened around mid-August and Kevin immediately called the Guinness World Records to report catching the colossal-sized white sturgeon.

Kevin said that Jake, Pete, and himself took turns on the rod and it took them about 25 minutes to reel it in. Kevin has been fishing for sturgeon in the area since he was 15 years old and has never seen a fish this big.

“I’ve submitted a world record for white sturgeon, and also looking into the largest freshwater fish ever found,” he told The Epoch Times, adding that it’s “going to take some time” to confirm everything.

The standard way to measure a sturgeon in B.C. is from the tip of its mouth to where its tail forks and splits. After measuring, they learned that it was an impressive 11 feet, 6.5 inches from tip to fork. Its girth measured a whopping 55 inches.

Kevin said that there have been sturgeons close to the length caught before but they were all under 11 feet when measured from tip to fork.

“Years ago, there was a fish that measured 12 feet [in total length],” he said. However, “It was actually under 11 feet [when measured from tip to fork]. But the total length was potentially over 12, and so that got marketed worldwide. It wasn’t anywhere near this fish.”

According to wildlife officials, if a fish caught measures more than 150 centimeters, which is just under five feet long, it is not allowed to be lifted out of the water. They do this as a matter of conservation to keep the fish alive.

What they do to estimate the fish’s weight is calculate the length and girth to get a guestimation of the weight. This sturgeon was estimated to weigh from 890 to 1,300 pounds.

“I couldn’t fathom how big these fish were,” former NHL player Peeters said. “Even when the fish came up, it was hard to believe.”

The fish did not have a tag on it so it’s assumed that it has never been caught before. However, the group tagged the fish and then released it to swim back off into the river. Kevin said catching the fish feels like winning the lottery.

“It was emotional, that day,” he said. “It’s actually unbelievable.”

See Footage Of The Fish Below