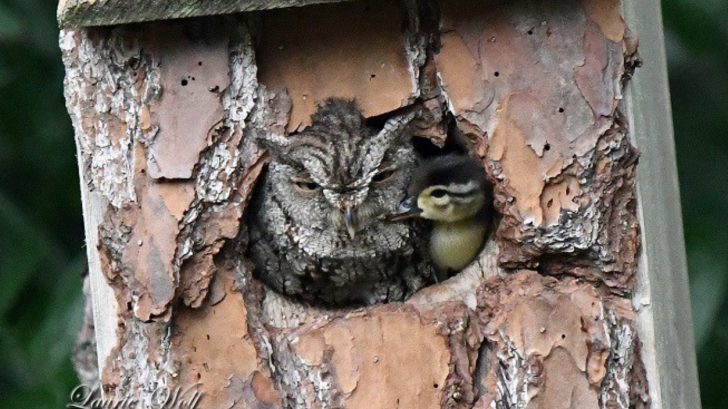 When ducks are traveling they’ve been known to lay their eggs in other birds nest.

According to National Audubon Society, scientists aren’t sure exactly why ducks do this, but it could effectively serve as a reproductive insurance policy for the survival of their young. Kenn Kaufman, field editor for Audubon says, “One possibility would be, in a sense, not putting all their eggs in one basket.”

It is not common to see a duck egg in an owl nest, yet, it is a true story that happened in Florida and there are pictures from good sources to prove it. An owl mistook a duck egg for its own and ended up raising it as it’s own.

The duo was discovered in a backyard in Florida and demonstrates that animals are kind, smart, and hilarious. Seeing two unusual animals pairing together is one of the most heartwarming things to observe in nature.

Laurie Wolf, a wildlife artist, and amateur photographer from Jupiter, Florida was amazed when she and her husband discovered the owl and duckling living in their backyard. She took pictures of the adorable pair and sent them to National Geographic.

The Eastern screech owl had decided to raise the wood duckling as its own – Wood ducks have been scientifically recorded living with eastern screech owls before but a baby duck like that would have normally been eaten by the owl.

According to National Geographic, “It’s not commonly documented, but it certainly happens,” says Christian Artuso, the Manitoba director of Bird Studies Canada, who made a similar observation back in 2005 while he was studying eastern screech owls for his Ph.D.

The recent discovery of this owl raising the duck as its own captured hearts all around the world. Laurie Wolf received several comments and reactions after she shared this duo’s pictures on Facebook.

“Oh … my goodness this is unbelievable !! You are magically to capture this Laurie Wolf!! Love it!” Joy Vest commented.

“Omg I love nature! We need to take lessons, and get along with each other!” shared David And Christin Neff.

Such a story reminds us of how animals can be very loving and kind. They can outsmart and even out human us by building unexpected friendships despite all their differences.

Watch the video below and hear the story as shared by LAURIE WOLF.