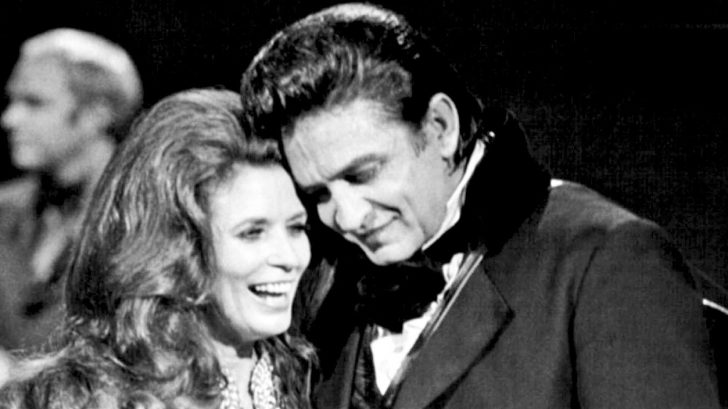 Johnny Cash and June Carter are regarded as one of the most successful couples in country music. It’s hard to imagine if it weren’t for one fateful meeting backstage at the Opry, we may not have classic country duets such as “Jackson.”

Prior to meeting, Johnny and June at least knew of each other. Johnny had grown up hearing June sing with her famous family on the radio, and June heard Johnny’s hit songs while she was on tour with Elvis Presley.

When the two finally met on the night of Johnny’s Opry debut, they felt like they had known each other forever.

Johnny reportedly said “I’ve always wanted to meet you,” to June, to which she responded with, “I feel like I know you already.”

It was in that moment that one of country music’s greatest love stories began.

Although Johnny and June were married to other people when they first met, each of them eventually divorced their respective spouses. The two of them got to know each other over the years, since June and her family went on tour with Johnny.

A romance eventually blossomed between the two, and Johnny proposed to June on stage during a concert in London, Ontario, following a performance of their duet “Jackson.”

June of course said yes, and the couple revealed their plans to marry when they went on stage to accept the Grammy Award for Best Country & Western Duet, Trio or Group.

Johnny and June were married a week after they became engaged, on March 1, 1968 in Franklin, Kentucky.

March 1, 1968 was a day of celebration for Johnny Cash and June Carter: It was the day that the two were married – just one week after Cash
proposed.https://t.co/pcK8Yyq9Vi pic.twitter.com/U2eLZAXOXz

From that point on, the couple worked and performed together over the course of 35 years. The two were inseparable, and following June’s death on May 15, 2003, Johnny was heartbroken. He passed away only four months later, on September 12, 2003.

To honor them, here are three of the original country power couple’s best duets.

Written by Billy Edd Wheeler and Jerry Leiber, “Jackson” was originally recorded and released by Billy. But one of the most recognizable versions of the song is by Johnny and June, who released their recording in 1967.

Johnny and June’s version of “Jackson” was a major hit, and peaked at the second spot on the country charts. It also earned the couple a Grammy Award in 1968, and it was during their acceptance of the award that they announced their engagement.

The song tells the story of a married couple who no longer feels the “fire” for one another. Both the man and woman reveal they haven’t been able to stop thinking about Jackson, singing “Well now, we got married in a fever, hotter than a pepper Sprout,/We’ve been talkin’ ’bout Jackson, ever since the fire went out.”

Johnny and June performed the song many times throughout the years. Prior to one televised performance of the song, Johnny couldn’t stop smiling as he introduced June and welcomed her on stage. At the end of the energized performance, Johnny wrapped things up in the best possible way by giving June a sweet kiss.

“YOU ARE MY SUNSHINE”

The 1939 song “You Are My Sunshine” is yet another one that isn’t exclusive to Johnny and June, but the country couple managed to make it their own.

Originally recorded by Jimmie Davis and Charles Mitchell, “You Are My Sunshine” has experienced long-lasting popularity, and has even been declared as one of the state songs of Louisiana.

The song has been covered by a countless number of artists over the years, including Johnny and June, who performed the song during another televised appearance. Johnny starts off singing first, while June looks on adoringly before she joins in on the harmony part.

We can’t decide what’s more beautiful: the sound of Johnny and June’s voices blending together, or the way they look into one another’s eyes.

Johnny  always admired the work of folk singer Bob Dylan, and Dylan felt the same way about Johnny’s music. That’s why it should come as no surprise that Johnny chose to cover one of Bob’s songs along with June, called “It Ain’t Me Babe.”

Written by Bob himself, “It Ain’t Me Babe” originally appeared on his 1964 album Another Side of Bob Dylan. In the song, the narrator tries to convince his lover that he’s not the man for her, singing “Go lightly from the ledge, babe/Go lightly on the ground/I’m not the one you want, babe/I’ll only let you down.”

Johnny recorded the song with June not long after, and released it on his album Orange Blossom Special the following year. As to be expected with any song by Johnny and June, their version of “It Ain’t Me Babe” was a hit.

The couple performed the song together in 1973 in Australia, much to the delight of the crowd. Despite the song’s somewhat sad lyrics, Johnny and June have fun with the performance. At one point they walk away from each other, and the smile on Johnny’s face as he looks at his bride will make your heart melt.

Eventually, Johnny wraps June up in his arms, and the couple remains in one another’s embrace up until the end of the song.
Johnny and June’s love story and many duets are equally iconic. Without either one, who knows what country music, or even music in general, would be like today.

One chance meeting brought Johnny and June together, and looking back on the music they made, we’re so grateful the stars aligned so they could make their mark on history together.