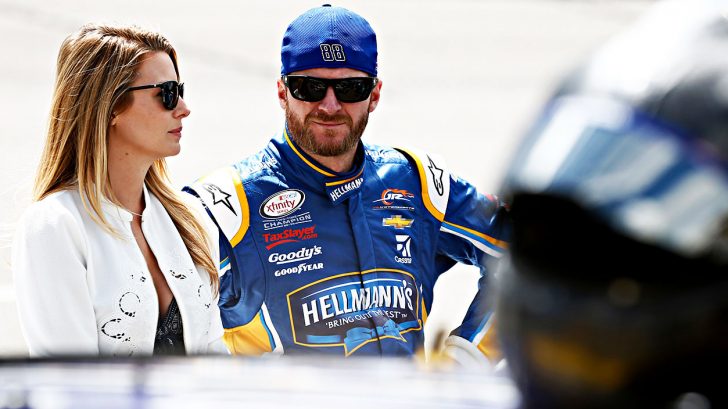 For the first time ever, famed NASCAR driver and newfound broadcaster Dale Earnhardt Jr. was away from his newborn baby girl, Isla Rose Earnhardt – during that time, he never stopped talking about his little one and obviously couldn’t wait to get back home!

At least somebody’s gettin some sleep around here. #momlife

Dale Jr. made his debut as a NASCAR analyst for NBC Sports this weekend for the Overton’s 400 at Chicagoland Speedway. His wife, Amy Earnhardt, and little one stayed home while he was away on work.

“I miss her terribly,” he said to The Today Show. “I’ve been on the phone with mom — with Amy — all weekend. Amy’s sending me pictures and videos trying to tide me over until I get to go back home Sunday after the race to see her.”

But, while Amy may be holding down the fort back at home – there is one thing she won’t be doing.

Sharing an adorable snapshot of her and baby Isla on Instagram while Dale Jr. was away, Amy issued out a hysterical caption that explained she will never be settling down over Isla.

“This little nugget is getting cuter every day! Hope she knows I don’t really mean it when I tell her I’m gonna eat her up,” she wrote jokingly. “I imagine she’s thinking, “Mom, settle the hell down.” No sign of that happening.“

This little nugget is getting cuter every day! Hope she knows I don’t really mean it when I tell her I’m gonna eat her up. I imagine she’s thinking, “Mom, settle the hell down.” No sign of that happening.

Both of these first-time parents are positively giddy over the arrival of their first child and they can’t get enough of her! We don’t blame them one bit!

In a recent interview, Dale Jr. also admitted that he and Amy have a competition going to see who can make little Isla smile the most – and from the video he posted after rushing home to see her, it looks like Dale might be winning!

Check out his video below!