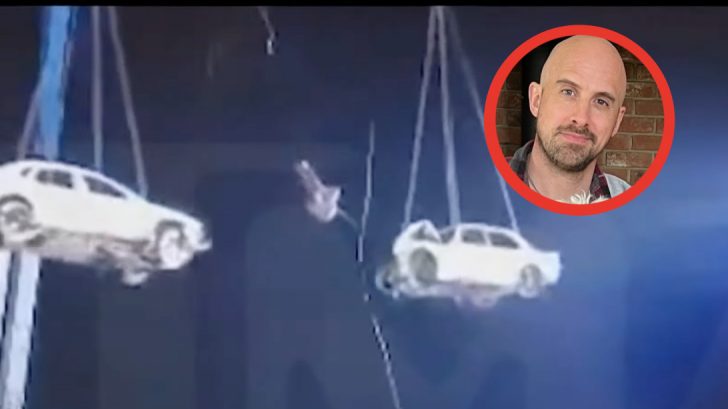 Six months ago daredevil Jonathan Goodwin was seriously injured while rehearsing for a stunt that was to be filmed for America’s Got Talent: Extreme. Now he’s sharing the extent of his near-fatal injuries.

On October 14, 2021, Jonathan Goodwin was strapped into a straightjacket and dangling upside down nearly 30 feet in the air. For his stunt Goodwin was supposed to free himself from the straightjacket while two cars that were also suspended in the air swung through the air on both sides of him.

But, in a devastating turn of events, the two cars collided and caught Jonathan in the middle. The collision ignited an explosion that caused Jonathan to fall head-first to the ground. He became unresponsive and was airlifted to a local hospital.

In a new interview with Out to Lunch with Jay Rayner podcast, Goodwin’s fiancee Amanda Abbington shared that Jonathan “nearly died” twice after the accident.

“The crash mat wasn’t moved and so he fell 30 feet and lost a kidney, broke both shoulder blades, shattered both legs, third-degree burns, broke his spine and severed his spinal cord and nearly died,” Amanda said. “And then on the operating table, he nearly died again.”

Abbington added that the daredevil was now paralyzed and in a wheelchair.

“Unless there’s a kind of stem cell surgery or that thing that Elon Musk is designing with the little chip, he’ll be like that forever.”

Goodwin followed up Abbington’s interview by sharing a photo of himself in a wheelchair and was optimistic about his future.

“6 months ago I went to rehearse something and left this little hairy monkey waiting patiently for me…he didn’t see his dad again until just a couple of weeks ago and when he finally did, dad had new cool wheels,” Goodwin wrote. “A lot has changed in the last 6 months, but love is a constant and I’m very very loved. Looking forward to my next chapters and being a roll [sic] model.”

Watch Jonathan Goodwin’s horrifying accident in the video below. Viewer discretion is advised.