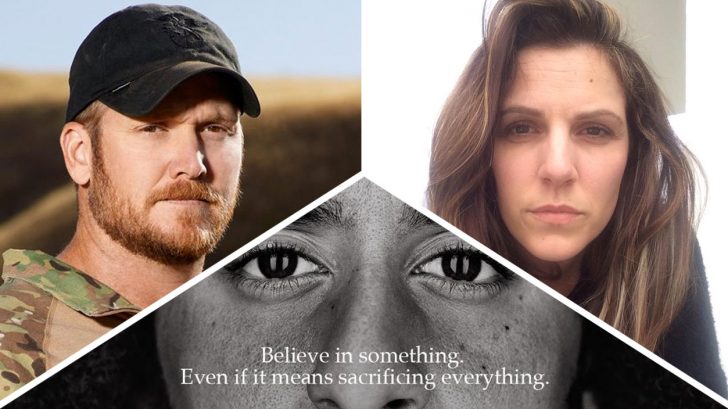 Sportswear giant Nike started a worldwide conversation in regards to their 2018 advertising campaign, which features former San Francisco 49ers quarterback Colin Kaepernick. The athlete, who sued the NFL for collusion, insinuated that the league conspired against him, ultimately prevented him from playing because of his protests which began in 2016.

Kaepernick began taking a knee during the national anthem before every game during the 2016 football season to protest police brutality and racial injustice.

To celebrate the 30th anniversary of its “Just Do It” campaign, Nike signed a deal with the polarizing athlete, who the company believes is “one of the most inspirational athletes of this generation, who has leveraged the power of sport to help move the world forward,” according to a quote from the company’s Vice President Gino Fisanotti.

The new advertisement features a black and white close up of Kaepernick with “Believe in something. Even if it means sacrificing everything,” written in white letters across his face.

Believe in something, even if it means sacrificing everything. #JustDoIt

Many celebrities saluted Nike and Kaepernick for their message, while others revealed their plans to boycott the company.

One person who had a lot to say about the advertisement was Taya Kyle, the widow of Chris Kyle, who is widely known as the most lethal sniper in United States history. His life story was portrayed in the Clint Eastwood film American Sniper, which was based on the book he wrote in 2012.

Chris served four tours in Iraq and was awarded a Silver Star Medal, four Bronze Star Medals with “V” devices, a Navy and Marine Corps Achievement Medal, and countless other accolades. He was killed in 2013 by a former Marine with PTSD who he was attempting to mentor.

Taya took to her official Facebook page, Chris and Taya Kyle, to express her grievances with the advertisement, especially the wording “sacrificing everything.”

“Nike, I love your gear, but you exhaust my spirit on this one. Your new ad with Colin Kapernick, [sic] I get the message, but that sacrificing everything thing…. It just doesn’t play out here. Sacrificing what exactly? A career?” she wrote. “At best, that is all Colin sacrificed… some money and it’s debatable if he really lost his career over it.”

In her longly worded statement accompanied by a close up shot of the ad, specifically the words “sacrificing everything” with a question mark underneath, she brought up the fact that Nike was insinuating that Kaepernick had sacrificed everything. She felt it was “insulting to those who really have sacrificed everything.”

Many people agree with Taya’s statement about Pat Tillman, so much so that there is a fictional ad circulating with his photo instead of Kaepernick’s.

Pat Tillman was a NFL football player that quit the NFL to join the army after 9/11. In 2004 he died in Afghanistan due to friendly fire. pic.twitter.com/qUbOYn7R87

She ended her Facebook post with, “Maybe you are banking on the fact we won’t take the time to see your lack of judgement in using words that just don’t fit. Maybe you are also banking on us not seeing Nike as kneeling before the flag. Or maybe you want us to see you exactly that way. I don’t know. All I know is, I was actually in the market for some new kicks and at least for now, I’ve never been more grateful for Under Armour.”

See her full, fiery statement in the post below.

Nike, I love your gear, but you exhaust my spirit on this one. Your new ad with Colin Kapernick, I get the message, but…

Posted by Chris and Taya Kyle on Tuesday, September 4, 2018