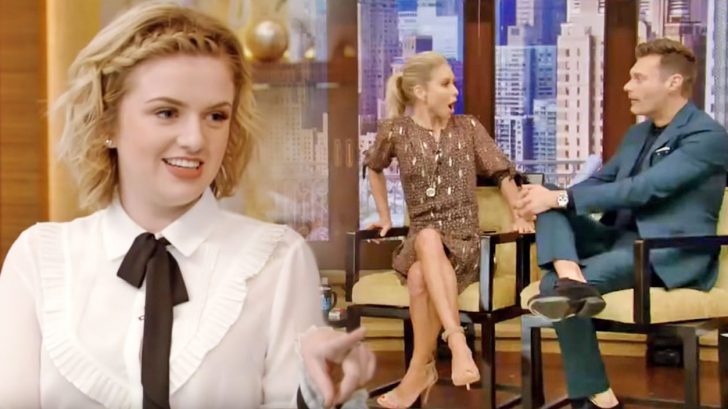 Hot on the heels of being crowned the American Idol champion, Maddie Poppe flew all night from Los Angeles to New York to appear on Good Morning America and Live with Kelly and Ryan.

Seeing her on Live was especially fun because co-host Ryan Seacrest was with her throughout her Idol journey, so it was almost as if two old pals were talking and catching up!

Kelly Ripa asked her how it felt to hear Seacrest say, “And the winner of American Idol is…Maddie Poppe!”

Instead of telling them how she was feeling in that exact moment, she took the opportunity to call Seacrest out!

“I have to tell you guys something,” she said. “Ryan, you’re really bad at hiding the card.”

Concerned, he asked her if she actually saw her name on it and she told him that throughout the season she’s been in a position to take a quick peek and never did, until the finale episode.

“There’s a moment where Caleb and I looked at each other because we both looked at the card before you said it,” she revealed.

See if you can spot that moment in the video below.

Seacrest had a strong defense for the reason Maddie and Caleb could see the name of the card a producer handed him. He said the card was the biggest card he’s been given all season – which it was!

This isn’t the first time one of the two remaining singers was able to see who won before Seacrest announced it. This happened during Season 2 when Clay Aiken saw Ruben Studdard’s name moments before Seacrest revealed it on live television. Apparently, he had even told this horror story to Maddie at some point!

Seacrest joked, “The first person that knew she won…was the winner!”

Even though she knew she was going to win, if only for a few moments, she still looked surprised to us! Watch her call out Seacrest on Live below.