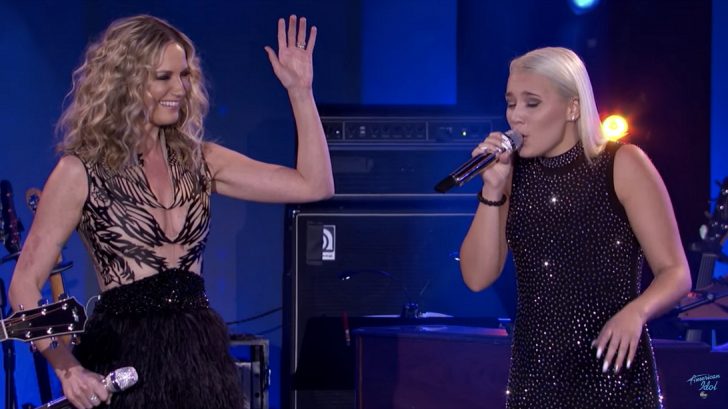 Gabby Barrett. Remember her name, y’all! You may recall her American Idol audition in which she struggled to find her own voice, instead “becoming” Carrie Underwood while singing the former Idol champ’s hits. But, with some encouragement from judges Lionel Richie, Katy Perry, and Luke Bryan, the 18-year old has not only found her voice but she’s owning it in a big way!

During Monday night’s Top 24 elimination episode, Barrett joined country duo Sugarland on stage to perform their platinum-certified single “Stay.” The song was solely written by Sugarland’s Jennifer Nettles and is one of the group’s most iconic performances. It’s safe to say that Gabby Barrett had some huge shoes to fill when she joined Nettles to sing “Stay.” The song was originally performed in a stripped down format with no harmony vocals, so when Barrett added a flawless second part to the tune, the result was truly mind-blowing.

In fact, the judges were in awe as they watched the performance. Lionel Richie, who teamed up with Nettles for a remake of his 1983 hit song “Hello,” could be heard telling the other judges “I loved that so much” when their performance was over.

Luke Bryan agreed, telling Gabby, “I don’t know if we’ve seen somebody today nail it from top to bottom. You didn’t miss one thing.”

Overall, it was a huge night for Gabby Barrett who landed a coveted spot in the Top 14. While many have criticized Gabby’s desire to be a country singer, her dad Blase defends her decision saying that it’s always been a dream of Gabby’s to bring a Whitney Houston-like power to country music.

“Gabby writes country music and she loves the country story. Her voice is so strong. She wants to bring a new sound to country,” Blase Barrett says.

After Monday’s performance we’re certain that Gabby has made the right decision and we can’t wait to hear more from her!

Watch Gabby Barrett and Sugarland perform “Stay” in the video below.