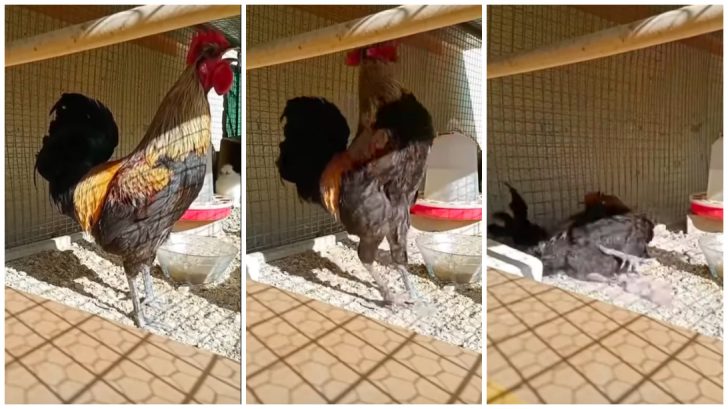 A rooster has found himself somewhat of an international celebrity after a video of him went viral. The video shows the “ambitious” chicken, named Bahtiyar, crowing for so long that it runs out of air and passes out.

The owner of the Denizli rooster, Okan Gokbudak from Turkey, said that the rooster does the same thing every him it crows and has become a local celebrity because of his over the top crowing.

“My rooster was crowing in the henhouse and I looked at it because the noise just went on and one. Then I noticed that the bird started to shake before suddenly passing out,” Gokbudak said. “I decided to film it and when I shared on social media, my rooster became an overnight celebrity.”

The proud owner added, “I guess the reason it passed out is because it was simply too ambitious. He doesn’t know when to stop, which means it keeps running out of breath and then faints.”

Gokbudak told local media that there has been a lot of interest in the rooster as a result of his viral status with numerous people making offers for the chicken.

“Someone living abroad wanted to buy my rooster for 1250 euros ($1,522). One person offered to exchange my rooster with his car worth 25 thousand liras ($3273). I told them I wouldn’t sell. I love her so much. I do this as a hobby. I never think to sell it. I am afraid that it will be stolen. I leave it in the cage in my room at night and in the coop at my workplace during the day,” he said.

Denizli roosters are held in high regard in Gokbudak’s Turkish city and are known for long crowing times. While normal roosters crow for roughly 5 seconds, Denizle roosters average crows last anywhere from 15-20 seconds, and sometimes longer. The result is often “fainting” roosters who run out of breath and pass out.

See the viral video of the ambitious fainting rooster from Turkey below.