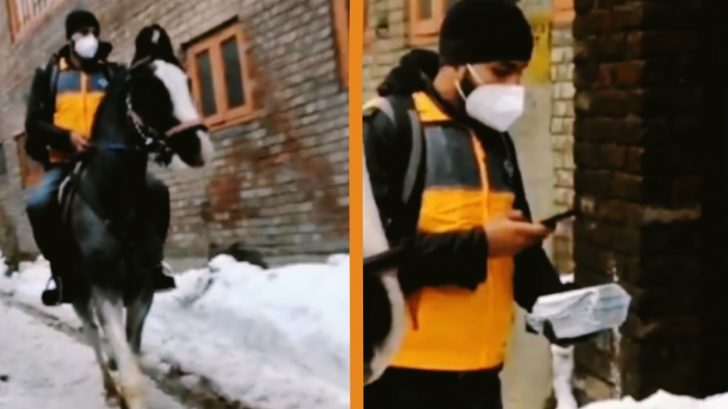 Photojournalist Umar Ganie shared a video on Twitter of a man delivering an Amazon package by riding a horse through the snow to each person’s house.

The video, filmed in Srinagar, a large Indonesian city, shows the delivery man riding down a snowy street with an Amazon delivery backpack on that’s full of packages to deliver.

The delivery man trotted along until he arrived in front of one of the addresses he was to deliver to. He jumped down off the tall horse and whipped out the package. The man then used his phone to scan the package before he laid it on a pile of snow near to where the owner of the package was waiting.

The owner standing next to the pile of snow grabbed his package as the delivery man got back on the horse. The delivery worker took off walking down the street again to finish out the mission of delivering the rest of the packages.

After Umar Ganie shared the video on Twitter, it got a lot of attention, including from Amazon themselves. Amazon Help commented on the video saying “Delivery still happens as promised.”

Video Below Of Man Delivering Amazon Package On Horse