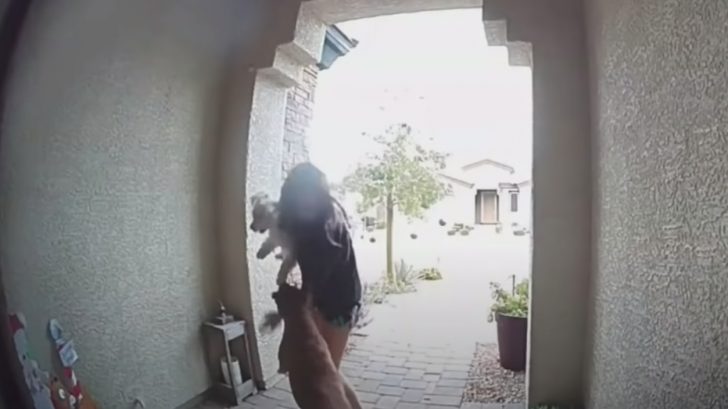 An Amazon delivery driver doing her routes in Las Vegas has become a hero after saving a small dog from being viciously attacked when a muscular pitbull went after it.

19-year-old Lauren Ray was at her parents’ home last Monday when the Ring doorbell camera was activated and she stepped outside to find a stray pitbull approaching her.

The dog seemed nice and friendly towards her but Lauren made the mistake of accidentally leaving the front door open and the family’s small dog Max got out and ran directly over to the pitbull.

The two sniffed each other while Lauren nervously watched. All of a sudden, Max growled and jumped at the pitbull who quickly and easily slammed Max to the ground.

Lauren was able to grab her dog off the ground and pull it up into her arms, but at this point, the pitbull was in attack mode and had its sights locked on Max.

Lauren was spinning around in circles holding Max up as high as she could while the pitbull tried to jump up and bite at Max. She did her best to swat the aggressive dog back but she was starting to get exhausted and began screaming for help.

“Well, my first thought was save the dog, you know, family pet. I would’ve let the dog bite me for all I care. I just wanted him to be safe because he’s so small compared to a pit bull. He didn’t stand a chance,” Lauren Ray said in an interivew with FOX5 Las Vegas.

Right when things looked like they were going to get worse, an unknown Amazon delivery driver ran out to nowhere to her aid. The on-duty worker told her to get inside her home while she used her own body as a barrier to block the pitbull from getting to Max.

“She saw me screaming for help. She could’ve just stood there, she could’ve recorded me getting attacked, but she chose to step in,” Lauren said.

She ran into the house with Max and closed the door behind her as the lady held the dog back. Once they were safely in the home, the Amazon driver swiftly walked back to her truck and continued on her route.

“I would’ve been lost without any help. I had no clue what I was going to do. I didn’t know if I was going to get hurt, and someone risking their life like that is a really big thing. And it means a lot to me,” she said.

Michael Ray, Lauren’s father, watched the entire incident go down in real-time from his mobile phone on the Ring camera app.

“As a dad, you know, panic mode, I’m a half an hour away from the house. Literally it’s like I’m watching a football game and screaming at it. I’m like, ‘Get in the house, get in the house!’” Michael Ray said.“It’s just amazing how she had no fear and wasn’t considering herself or anything. It was just that she saw my daughter needing help and came flying in and saved the day.”

A neighbor watching called the police who got in touch with animal control who confirmed that the dog was picked up and safely removed. As for who the mystery Amazon worker was, that is still unknown, but the Ray family are trying to find out who she is so that they can thank her.

Watch Footage Of The Attack Below