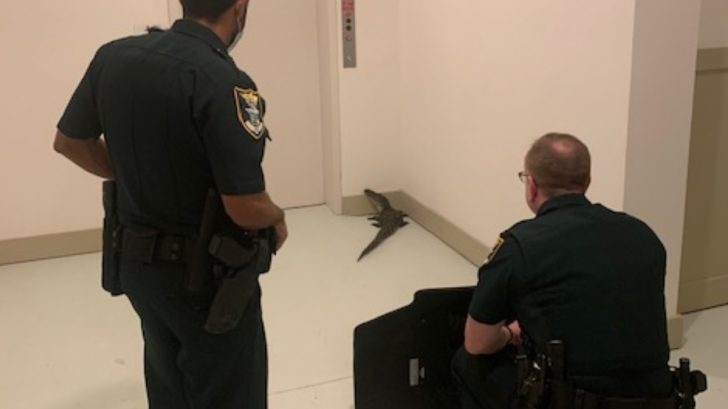 On Monday, August 3, 2020, Lee County Sheriff’s Office in Florida posted a photo on Facebook stating that the department was called in to deal with an issue involving residents being trapped inside an elevator of an apartment building.

You’d think maybe the elevator had some mechanical issues but after being fully informed, they realized it was more unique than that. According to the Facebook statement, a small alligator had trapped the residents by standing in front of the elevator, preventing them from exiting.

“They were unable to exit because of an alligator at the elevator doors,” Lee County Sheriff’s Office wrote on Facebook.

Deputies Hernandez and O’Leary arrived on the scene and cornered the gator while they called an animal trapper to capture it. Once the trapper arrived, he captured the animal and removed it from the complex.

The residents of Estero Parc were finally able to exit the elevator and continue on with their day. They also said they were extremely grateful that Hernandez and O’Leary responded so quickly.

“Deputies responded and isolated the alligator until a certified trapper arrived and humanely removed the gator. The apartment complex community was extremely thankful for the deputies response,” Lee County Sheriff’s Office wrote on Facebook.